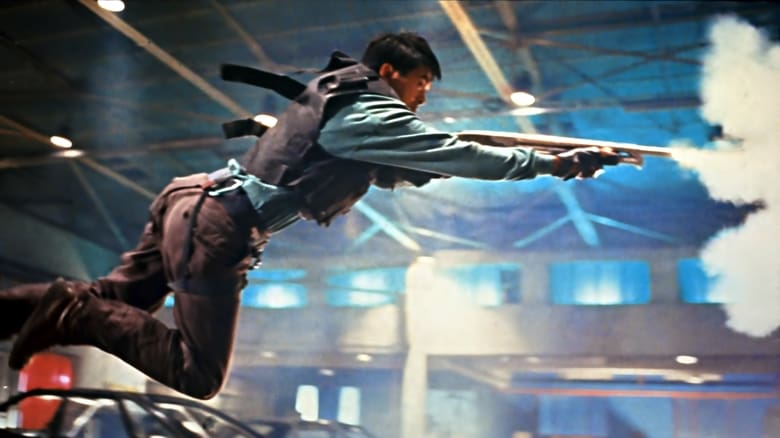 Hard Boiled is by far the most wildly entertaining film I've seen in some time.

When your buddy cop film has a higher kill count than Saving Private Ryan and Predator PUT TOGETHER, you know you've made a spectacular film.

Chow Yun-Fat stars as the explosive cop veteran known only as "Tequila". After his best friend is killed by gangsters in an intense shoot-out in a teahouse, Tequila seeks revenge on the gangsters, with the help of undercover cop Alan.

I'm going to go right ahead and state the obvious: The main selling point of this movie is the ACTION. The beauty of the action cannot be done justice with words, so I've included several GIFs to help picture it's awesomeness.

The dialogue is average. There are some funny, well-thought out lines but the rest is mediocre buddy-cop cliches. The screenplay itself doesn't have much substance. The plot is extremely bland. You can tell that the plot is only designed to loosely string together about five of the best action sequences ever shot. Ever.

You thought Django Unchained had a lot of blood? You thought Inglourious Basterds had some insane action? Tarantino's action style was BASED on John Woo, and it still doesn't hold a candle to a John Woo original thriller. The opening tea-house scene is intense beyond words. You don't know what's going on, yet you don't care. You just revel in the violence.

And the climactic hospital ending scene is simply gorgeous. Thirty-odd minutes of non-stop shoot-em-up, all done in what looks like one take.

The gunfights are art. John Woo has turned gunfighting into a deadly dance. It has the choreography of a Jackie Chan fight scene. It has the epic slow motion of Zach Snyder fights without the Hollywood bombast. It is creative, it is spectacular, and it is raw.

It's over-the-top, but it never feels overdone. One never tires of the bloodshed.

Sure, like most thrillers like these, John Woo's shooting scenes are very unrealistic. Bullets propel men several feet away, as if they were hit by a car. Protagonist pistols never seem to run out of ammunition, unless it serves the "plot".

Explosions nearby leave the heroes untouched. They seem to have bullet-deflecting devices as well, unless it serves the plot.

But who cares? It's still great. I'd argue that without these inaccuracies, this movie would suffer as a whole. It's unbelievable anyways. Might as well go the full circle.

Watch it for the action. It's not like a Tarantino film where the dialogue/plot are brilliant, or Transformers film where it's all CGI.