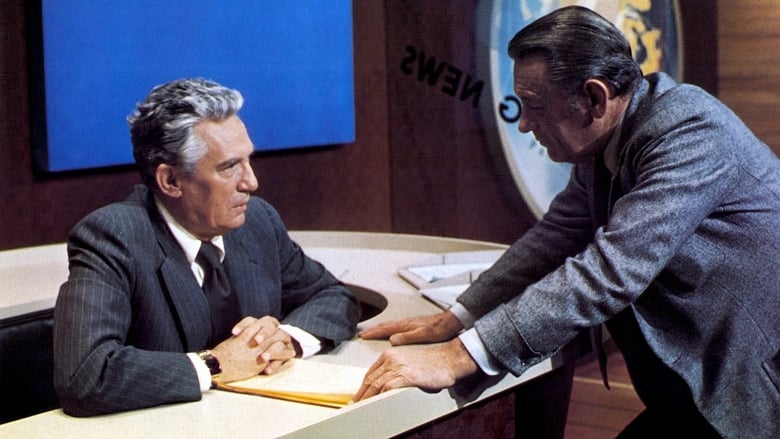 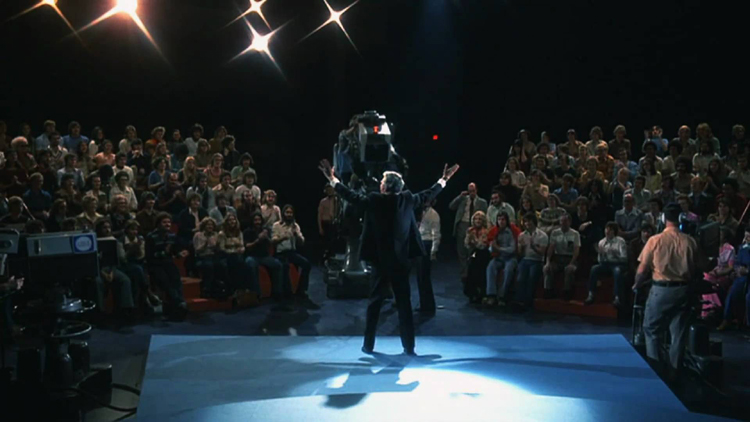 Network starts off with a bang, when a major network news anchorman is fired and given his two weeks notice. The reason?..Because he's grown old and the station manager wants to boast their dismal ratings. I loved how this seemed almost semi documentary style...and we're given an insider's view into the sleazy world of network executives and corporate profits. Interesting stuff!

The first hour was powerful, as we see how giant corporations gobble up networks and the proceed to turn respectable news stations, into infotainment. This movie is certainly ahead of it's time! 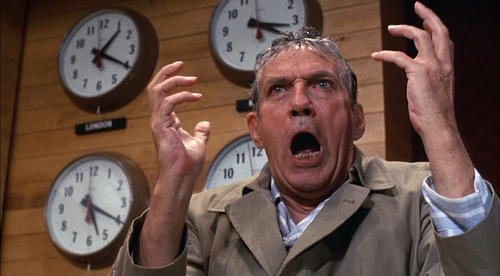 An iconic scene from Network as actor Peter Finch vents his anger on live TV..."I'm mad as hell and I'm not going to take it anymore!"

It was fascinating seeing how the network executives make programing decisions that effect ratings and profits. I loved the way the fictitious forth network (this is before cable TV) named UBS is at the bottom of the heap and losing money fast. When they fire their aging news anchor, he shocks the hell out of everyone by threatening to blow his brains out on live TV!...This movie at that point, caught my attention!

What follows is a cascading effect where the network executives take on even more provocative 'news' shows to boast their sagging profits. I swear this movie is way ahead of it's time, foretelling not only news as entertainment, but foretelling the coming of reality based TV shows.

As much as I liked the subject matter, I was mixed on the acting, some of it was flat and hammy. The only stand out actors to me, were Robert Duvall & Peter Finch. William Holden and Faye Dunaway at times sounded like they were acting in a bad TV soap opera. Very cliched, long monologues that didn't resemble real speach or real people. Their romance scene, was like something out of a soap opera and felt tacked on. It's probably not their fault, as the dialogue was cheesy in the scrips. But who cares I thought, this was still a pretty great movie.... 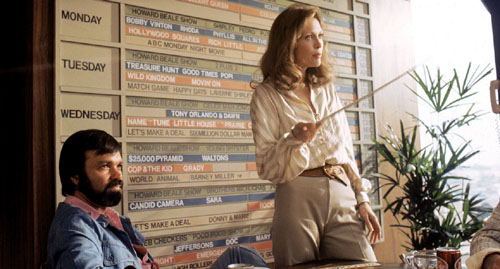 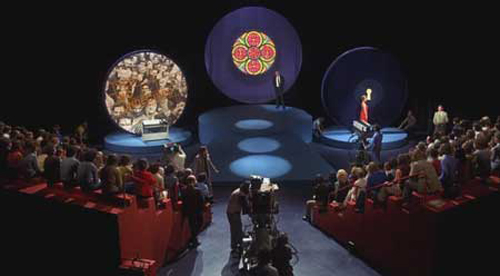 In what has got to be one of the more kooky scenes, a reality based TV info-news show is created with a psychic as one of the host.

However the movie goes to hell in the second hour, when it becomes farcical and attempts satire. We get one really lame plot turn, when the executives hire members of a radical political group who rob banks, the Ecumenical Liberation Army. That was the start of dumbing down the movie.

Worse is when we see a bunch of high paid network executives in some dingy hide out, signing contracts with the ELA bank robbers. Ridiculous. If this was done for comedy, it wasn't funny. And as the rest of the movie wasn't comical, it took away from the power of the story. And as satire it took away the realistic documentary feel of the movie and diluted the message.

But that's what director Sidney Lumet does, he delivers his social messages with a sledge hammer. Apparently Sidney thinks the audience is stupid and won't get his point unless he makes it painful obvious. I hate movies that dumb it down for the audience, and despite the totally prophetic and important message of the movie, I can't overlook the sloppy execution by the director.