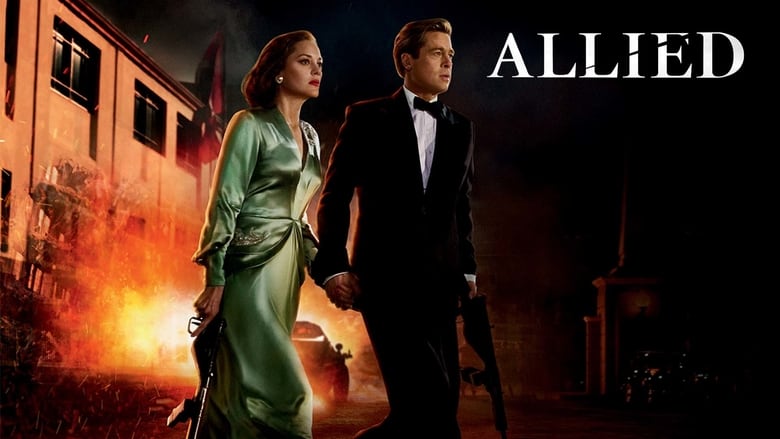 by skizzerflake
posted on 11/26/16
in
Allied - Derivative vintage movie stuff, but not too bad

Is it a Casablanca remake or a Casablanca sequel? Fortunately not. Fortunately it’s also not an Inglorius Basterds do-over either. What it is, is a story about star crossed lovers who meet in Casablanca. It’s the so-called Free France zone, officially still France, but infested with Nazis in 1942. The French, eager to remain “free”, have to give the Nazis a lot of latitude. Meanwhile partisans are at work. Mark Vatan (Brad Pitt) is Canadian, is in uniform sometimes and other times he’s acting with French partisans. When he’s not at work, he’s in a night club that looks an awful lot like Rick’s Cafe Americain. It’s there that he meets Marienne Beausejour (Marion Cotillard), a beguiling but deadly partisan, who barely escaped from a failed previous operation. The two of them are assigned to work together to kill some nazis and collaborators who are in Casablanca. The expected romantic sparks fly between Vatan and Beausejour and, after an operation that requires them to escape the city, they get married and have a daughter, and live in war-time England, barely evading The Blitz. Vatan is still in uniform, working with British intelligence, under the harsh supervision of two very procedurally rigid bosses, Marienne is now a sweet mom, trying to raise her daughter in this horrifying time.

This is when things get complicated. Vatan is confronted by his superiors, who claim that Marienne is a double agent. They are fairly sure that the real Marienne was killed in the failed operation and that the current one is a German infiltrator. If they prove their suspicions, Vatan must kill her or be killed himself. This much is in the trailer. I’m not going any further with the plot since, if you’ve ever seen spy movies, you can probably anticipate the possibilities and conflicts of the story. It’s about loyalty to country in conflict with loyalty to a spouse, and not knowing which part of what you think you know about a person is right.

Allied was directed by Robert Zameckis, who you might remember from the Back to the Future movies, and other pop movies like Flight, Castaway, Forest Gump and The Polar Express. Pacing and directing is spot-on. Allied is lushly filmed, with lots of WW II-appropriate sepia tinted sets, Glenn Miller songs in the soundtrack and at least a little of the moral urgency that came across so many previous-era WW II movies. Special effects are quite good at putting us in England during The Blitz, when so many people clung to life hoping to survive nightly bombing raids and trying to keep their spirits up, in spite of death and destruction all around them. Allied, however, is less of an FX movie than it is a personal story needing good characters and convincing acting. The British cast (Mark and Marienne’s handlers) are good at being stern faced Brits, but the main weight of the story is about Mark and Marienne. My problem with the movie is that I can’t get past how much of the visual set up in Casablanca looks like the old movie Casablanca, even down to the night club. They didn’t have a piano singer named Sam but otherwise it’s an updated version of Rick’s. The star-crossed lovers theme continues the comparison. Unfortunately Brad Pitt just isn’t Humphrey Bogart, no matter how many cigarettes he smokes. He’s OK, but just OK. I do think that, in a different world, Marion Cotillard could play the role of Ilsa, but that’s not in this script. Instead we have Mark and Marienne, mowing down nazis with Sten guns.

That said, Allied is not a bad movie. It’s not a great movie either. It is full of period detail, a somewhat believable plot, decent acting and a suspenseful ending. The “Pitt is no Bogie” part doesn’t ruin it, but it does remind me just how good Bogart was at creating a character in flicks like Casablanca, Passage to Marseille and To Have and Have Not, the stylistic ancestors of Allied. It was hard to avoid the comparison. The plot setup made comparison to the movie Casablanca unavoidable and made it seem like Pitt, a decent actor, was being set up to fail. They even set the first third of the movie in Casablanca. Couldn’t they have chosen another location? Why Casablanca? The movie would have fared better without that obvious comparison. If you’re not a fan of these old war time classics, Allied might play better for you but if you are, it’s decent but not entirely satisfying.