Some Kind of Wonderful

by Gideon58
posted on 9/25/16
in
SOME KIND OF WONDERFUL
Screenwriter John Hughes and director Howard Deutch, the creative team behind Pretty in Pink and the architects of 80's teen angst scored again with a 1987 confection called Some Kind of Wonderful, a basic love triangle made watchable due to Hughes' uncanny insight into teen psyche and Deutch's surprisingly detailed direction. 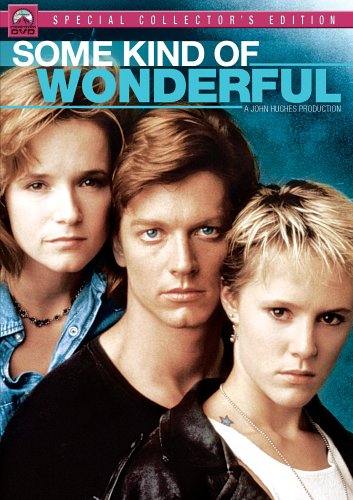 The basic triangle here involves Keith (Eric Stolz), a teen mechanic who dreams of being an artist who has been best friends since the third grade with Watts (Mary Stuart Masterson), a tomboy who really hasn't discovered her inner girl yet and Amanda Jones (Lea Thompson), the popular school beauty who can't seem to extricate herself from a sleazeball named Hardy Jenns (Craig Sheffer).

As with most John Hughes teen comedies, we pretty much know where this is going about ten minutes in, but what makes this one interesting is the very complex journey the characters take, sometimes of their own doing and the way the characters aren't always what they are supposed to be for the story that unfolds. We understand how Keith's obsession with Amanda is intensified when he learns that Hardy is not faithful to her, but we don't understand is how Keith can be completely clueless as to how Watts feels about him. And Watts doesn't exactly make all the right moves either...when Keith and Amanda have their big date, why on earth would Watts agree to be their driver and why would Keith accept such an offer? Watts goes through a lot of pain during this story but a lot of it is self-inflicted and to make things even more complicated, the character of Amanda, who we would expect to be a total bitch, is not at all, making us scratch our heads as to how we're ever going to get to that ending we saw ten minutes in.

But Hughes and Deutch have crafted a tale that hits all the right teen angst notes with the aid of a solid cast. Stolz is a charming leading man and Mary Stuart Masterson is a revelation as Watts, the sight of her huge expressive eyes welling up with water is hard to resist and Lea Thompson keeps Amanda likable even though she shouldn't be. Also loved Elias Koteas as the school psycho and Maddie Corman as Keith's sister. It ain't Pretty in Pink, but it will hold your attention.
» More about Some Kind of Wonderful
» More reviews of Some Kind of Wonderful
» More reviews by Gideon58