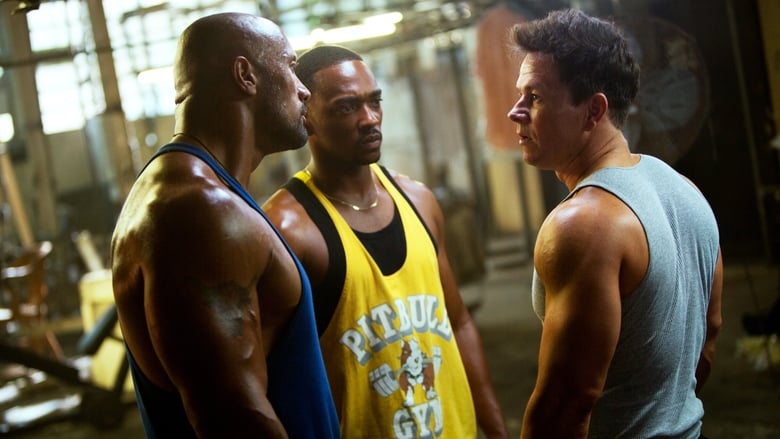 
Michael Bay is an underrated director. He has made a few good films. This is one of them. "Pain and Gain" is the antithesis of Bay criticisms, featuring no CGI, a small budget, and an anti-American, anti-conservative message. It's also an intelligent film, a biting commentary on the American Dream. From Michael Bay. Starring Marky Mark. I'm more surprised than anyone at how much I loved this.

"Pain and Gain" is the story of Daniel Lugo, Adrian Dorbal, and Paul Doyle, played respectively by Whalberg, Anthony Mackie, and The Rock. It is the "true story", which actually is rather close to the truth, of how these three men became the stupidest murderers in history. Something you'll quickly realize is that, with the exception of a retired police detective played by Ed Helms, every single character falls somewhere between idiotic and incompetent, from the killers to the victims to the cops chasing them. Everybody with a name wants to seek the American Dream, and Michael Bay wants you to know how awful this dream really is. You can be a "don't-er" and never accomplish anything with your life, or you can die trying, but either way your existence is empty. Anybody who tries to do something for other people is called a failure by the protagonists, but at the end of the day Lugo and company fail much more often than they succeed in trying to benefit just themselves, which as Lugo ends the film with, is considered to be "the true American Dream": shallow, lonely, and left for dead. "I don't just want everything you have", Whalberg says in a particularly poignant speech to a rich man he is jealous of, but "I want you to not have it". Most people think of Bay as as a populist, which his "Transformers" movies definitely are, but "Pain and Gain" is a feel-bad film with a pessimistic worldview.

In that way, the film works on its own as a dramatic piece of art. Lugo and Doyle both have complete characters, with fulfilled arcs and layered performances. Daniel Lugo is one of the dumbest people ever seen on a screen, and he is the relative smart one of the group. He is also extremely frightening when he has to be. On a dime, he can turn from a moronic bodybuilder who drops stupid comments about how being fat and eating salad is unamerican into a stone cold psychopathic killer. He is fierce and incompetent at the same time. Whalberg does a great job at bringing Lugo to life, buffing up physically and becoming this character, playing him as dumbly as possible. Paul Doyle (a fictional combination of multiple associates of Lugo) has an equally compelling character. He is a 300 pound monster and a jail inmate who becomes a born again Christian, only to fall back into his old ways after joining Lugo. Dwayne "The Rock" Johnson has never been much of an actor, but he gives a genuinely phenomenal performance in this movie. He could have won a comedy Golden Globe for this work. A lot of it is good writing in contrasts, because this giant man listens to Christian rock music and is soft in his personality, but The Rock is a great physical actor, not just with his ripped body but also with his facial expressions, and his line delivery nails the stereotype of a Miami bodybuilder who has never touched a book in his life. The Rock actually becomes a character, and he comes off as a real person, which is something I never thought I would say about him. His comedic timing is excellent, and he handles dramatic beats almost as well.

While it is certainly dark, "Pain and Gain" is a dark comedy before anything else, and this film is absolutely hilarious. I disagree with the idea that the film fails by making these killers sympathetic. The three killers are dumb, awful people, and the audience is supposed to be laughing at how stupid they are. They are intended to be funny, not likable. It is similar to "The Wolf of Wall Street" by focusing on morally bankrupt people and making their adventures funny, but this is funnier and features less indulgence. Nearly every single joke connects. Mark Whalberg found his comedic timing for the first time in a decade by interjecting fitness lingo into his crime preparations. A serious movie would show a character discussing how to attack a victim. Daniel Lugo insults him for his poor quad definition and dresses up as a ninja to attempt kidnapping him. This is a man who looks up to his role models, Scarface and Michael Corleone, and assures his companions that nothing bad can happen because he has seen enough movies. The Rock gets so many fantastic jokes, both making them and being the butt of them. He gets to deliver most of the film's more absurd moments, usually working around his addictions to Jesus and cocaine. He is even dumber than Lugo whether he is maiming bodies or giving sermons. Unable to form a personal relationship with victim Victor Kershaw, he has to settle for making the rich Jewish man accept God into his heart. Anthony Mackie is restricted to sex jokes, and they are some of the weaker parts of the film. It is most reminiscent of older Michael Bay works, playing erectile dysfunction for laughs. Still, Mackie is a decent actor, and he has great chemistry with Johnson and Whalberg to maintain a sort of Three Stooges dynamic, if each of them weighed over 200 pounds and had a negative IQ. That's not to mention various supporting players, like comic actors that I usually cannot stand such as Rebel Wilson and Ken Jeong, both of which had a few funny lines and solid performances, or one line extras that get to play along with the idiocy of the main trio, like a Home Depot employee who receives a chainsaw that stopped working after it got stuck with human hair, calls it fur, and gladly lets Lugo switch it out for a different power tool (This event, unfortunately, is definitely historically accurate). Bay even manages to subvert the misogyny that he is so often blamed for with a brilliant joke in which Daniel demonstrates the importance of neighborhood safety by asking for a volunteer rapist to attack his stripper girlfriend, only for every single man in the neighborhood to try to volunteer, forcing Lugo to declare that it is "not a gang rape" and that he only needs one man. It is a vicious assault on married men with a seemingly perfect life who are desperate for a touch of a younger woman. Like everyone else, the part of the neighboring men, though brief, emphasizes how unintelligent Americans can be at their worst, and how being wealthy is pointless when people are that brainless. The screenwriters have crafted a world just dumb enough for Daniel and friends to think that they are the smartest ones in the room without earning anything, serving as a reinforcement for Daniel's belief that making a plan and taking action can make anybody rich without earning anything, and making me believe that this country has no chance of survival because people like this really exist.

Michael Bay's directing trademarks complement the ridiculous film perfectly. His aggressive camera movement gives energy to the numerous dialogue sequences between action scenes, which make up most of the run time. The slow motion gives the movie time to breathe between laughs and allows for Mark Whalberg to act with his exaggerated body language. The intense, bright colors make for great sets, creating an environment that endorses excess as much as the characters, all of the characters, criminals, victims, and peacekeepers alike. The typical assault on the senses is as obnoxious as ever, but it is supposed to be obnoxious in this case. "Pain and Gain" needs to be as loud and in-your-face as the characters and the plot, which has minor details so bizarre that it must be real, because it seems impossible to make up. Bay's new stylistic trick, which the screenwriters should really be credited for (although Bay did execute it flawlessly), is the nearly constant voiceover to express the inner thoughts of characters. If only Daniel Lugo was doing voiceovers, the movie could have become monotonous, but every major character gets to use the device to describe what they are thinking as they are doing things. These segments are always funny, but they also advance the plot and characters in a way that would not be possible with just dialogue. Daniel might be laughing about almost killing Victor while showing a straight face, but Paul is deeply sad because he thinks that his immoral actions could keep him out of heaven while keeping the act up for his partners, and Victor himself is laughing in his head about how he should not be alive while he is physically unable to form laughter. More than just a cheap storytelling device, the voiceovers add a new dimension to a movie that needed them to work as well as it does.

I do not know why this got such poor reviews. I think Bay's name has a lot to do with it, unfairly so. There are a few points against it that are valid but do not personally bother me. Maybe it was inappropriate to make a comedy about real criminals, turning kidnappers into protagonists. Maybe the film is misogynist more often than it isn't, relegating all women to mindlessly following their illegal husbands. And maybe it is a little bit too violent for its own good. But those negatives don't detract from an amazing experience, it's just minutia that prevents it from landing a perfect score. "Pain and Gain" is a fantastic film that works because of its committed actors, darkly funny script, tight direction, and deep social commentary. Regardless of how much you dislike the names involved, this is a film that absolutely must be seen.
» More about Pain & Gain
» More reviews of Pain & Gain
» More reviews by ursaguy