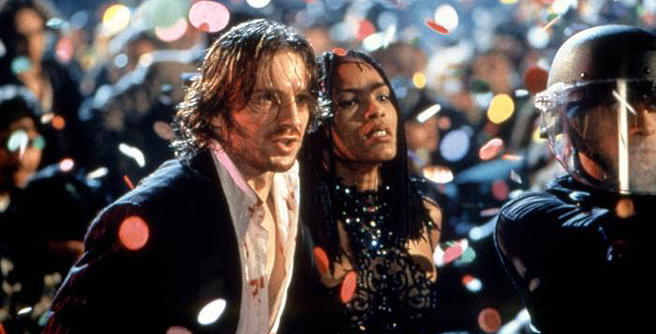 Considered one of the most underrated cyberpunk movies ever made and featuring the combined efforts of James Cameron (Aliens, Titanic) and Kathryn Bigelow (The Hurt Locker), it's a movie I've been needing to see for a long time.

Let's have a New Years Revolution!

I'm really at a loss with this movie. Mostly because it's one of those that I really struggle to criticize. It's paced great, the story makes sense, and it manages to be really absorbing all throughout.

Here's what few things I'd consider gripes:
+ Kissing (obviously).
+ The movie opens with a high-pitched shrill that's really annoying.
+ Some characters are introduced only very briefly, but you're expected to remember them and their names.
+ Two or three scenes/shots are set up with predictable conclusions, but idle anyway.
+ A couple actors like Juliette Lewis and Michael Wincott turn in weak performances (Lewis seems stupid bored and Wincott is like if Top Dollar from The Crow smoked a cigarette factory).

That's... about it. Mostly nitpicky stuff. I can't think of much more I can complain about.

The basic premise is it's just on the eve of the new millennium and save a couple predictions of future you hear in the background, there's really only two major deviations from history:

1.) Social order is so screwed that police and military are combing the streets every night.

2.) There's a new previously military black market technology called "wire-tripping" that allows you to record your first person experiences (all senses intact) and share them on tapes. People who regularly use the technology are called "wireheads" and it's portrayed as questionably addictive as well as dangerous because applying it improperly can result in permanent brain damage.

These being the only deviations, I'm disappointed to say that it isn't really a cyberpunk movie, however it certainly manages to capture the underground aesthetic that pervades movies like The Matrix.

I won't go into the story, suffice it to say it's a murder mystery, it's complex but reasonable to follow (it does a great job telegraphing information visually), while juggling themes of anarchy, social upheaval, addiction, and "the end of the world".

Honestly, my biggest praise for the movie has got to land squarely on it's two lead characters, Lenny and Mace, played by Ralph Fiennes and Angela Bassett respectively. 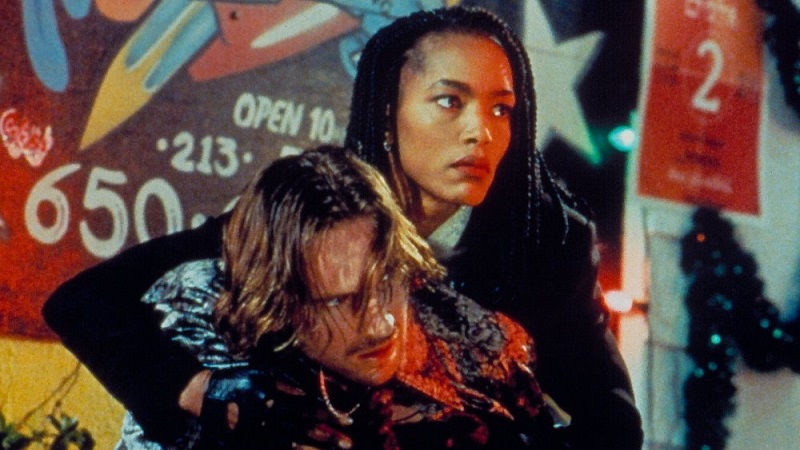 These characters are great. Lenny's an ex-cop with little of the cop left in him and Mace seems to have picked up the formal mannerisms he's left behind.

Lenny's a talker, always trying to hit up someone new with a wiretrip and struggles to reconcile the relationship that he once had with character, Faith, who seems reluctantly over him despite us never really learning what transpired in their history.

Mace is a mother, nanny turned limo driver, who abhors wiretripping, but maintains a close, albeit strenuous relationship with Lenny. She seems like she might have romantic feelings for Lenny, but it's likely one-sided given his pursuit of Faith.

Mace is easily my favorite character in the movie. Not only does she have several moments of buttkicking badassery, but she stands out also as an emotional character. She contrasts with Lenny in her attitude, her professionalism, and her values. She REALLY IS a three-dimensional character, and I'm amazed that we finally get this from a dark-skinned woman in lead role.

Not only that, but she complements the other half of the only biracial romance between lead characters in a good movie I've ever SEEN.

She puts Rose from Titanic to shame easily, and the best parallel I can make to her is Deunan from Appleseed. 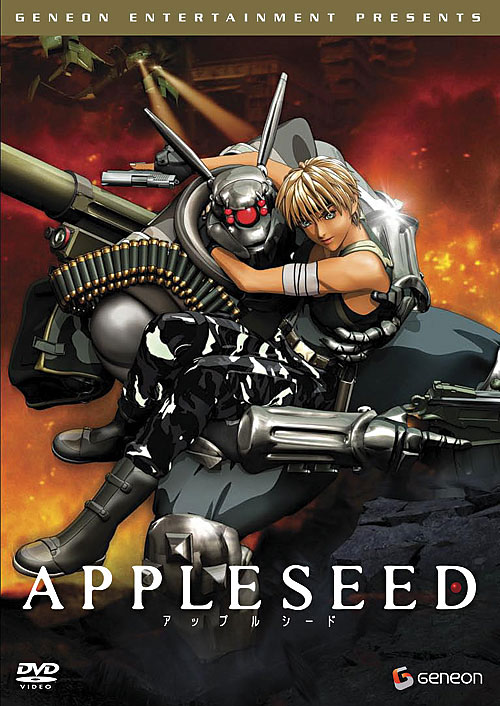 Yes, imagine Angela Bassett as a cyborg supersoldier,
carrying around a little Ralph Fiennes. It's exactly like that.


All told, I'm very glad I watched this movie, HOWEVER... to earn a 5/5 from me, Strange Days has to really hit it out of the park with something that appeals to me specifically.

I don't know what that is.

Maybe I'll have to watch it again sometime and figure it out, but in the meanwhile, Strange Days gets a lean, mean...