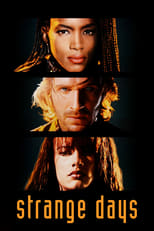 Release: Oct. 13th, 1995
Runtime: 2 hours, 25 minutes
Set in the year 1999 during the last days of the old millennium, the movie tells the story of Lenny Nero, an ex-cop who now deals with data-discs containing recorded memories and emotions. One day he receives a disc which contains the memories of a murderer killing a prostitute. Lenny investigates and is pulled deeper and deeper in a whirl of blackmail, murder and rape. Will he survive and solve the case?

We didn't find any linked discussions for this film. Here are the results of a quick search of possibly related threads:
6 Strange Days
Overlooked 1995 cyberpunk thriller that I rewatched recently and forgot how good it is. Love it's gritty atmosphere and it's one of those Sci-Fi films that feels realistic and plausible, all the mor...
0 Strange Days (1995)
A charismatic hustler and intense limo driver attempt to solve nasty murders against the backdrop of a chaotic, riot-filled city as an apocalyptic New Year of 2000 approaches. Ex-cop Lenny Nero ...
11 30 Days of Night: Dark Days
Originally Posted by Jrs' Sequel Buzz Thread 30 Days Of Night Sequel Shooting In October It was more than two years ago that it was first reported of ...

TheUsualSuspect Bigelow gives the film a gritty sense of realism, yet no one in this film feels normal.
READ REVIEW

Omnizoa Honestly, my biggest praise for the movie has got to land squarely on it's two lead characters, Lenny and Mace, played by Ralph Fiennes and Angela Bassett respectively.
READ REVIEW