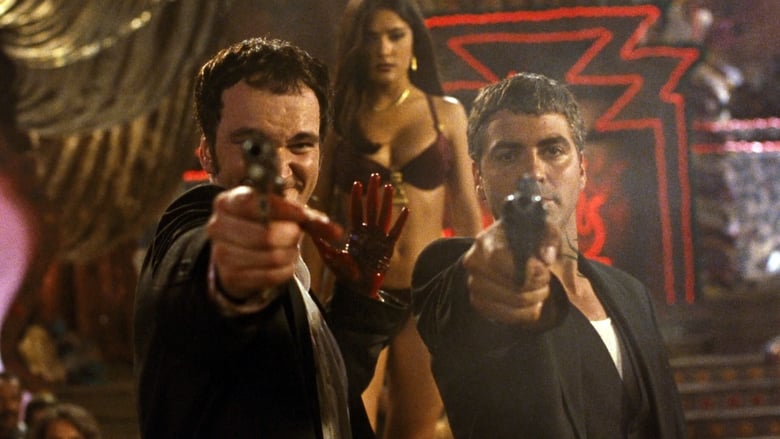 From Dusk Till Dawn

Four out of Five Stars

I'm in a horror movie mode, so I thought I would review one of my favorite horror/comedies.

Robert Rodriguez's From Dusk Till Dawn is one of the most unique movies I have ever seen. The film starts out as your usual mid nineties crime caper film, sort of like Reservoir Dogs, Pulp Fiction, the Usual Suspects, or any of the films in the whole "Elmore Leonard" genre. (so many of the films from this decade owe a lot to Dutch Leonard, I figure give credit where it's due.) Two escaped criminals, Seth and Ritchie Gecko (Geprge Clooney and Quentin Tarantino) are carving a bloody path across Texas into Mexico and towards freedom, or so they hope. Seth is a confident, charismatic outlaw, while his brother Ritchie is quirky, soft spoken, and incredibly impulsive. The two have little to nothing in common, but Seth is determined to protect his brother and keep him out of trouble. In a way, the first half of the film is like Quentin Tarantino presents "Of Mice and Men," if George and Lennie were bank robbers.

After Ritchie kills their hostage (Why he does is never explained), the brothers hijack an RV owned by a pastor (Harvey Kietel) and his family (Juliette Lewis and Ernest Liu) and force them to drive it to the town of El Ray, Mexico, a haven for criminals escaping American law enforcement. Once there, they are told to wait untill dawn at a strip bar for truckers known as the Titty Twister. This is where things get weird. The bar is run by "the most evil woman in the world," Satanika Pandaemonium (Salma Hayek), who also happens to be the queen of the vampires. The rest of the film is an all out horror show, with huge doses of black humor and ultra-violence, bringing up the question, will the brothers even make it through the night, let alone to freedom?

The main players all turn in great performances, but this really is Clooney's movie. He takes what is probably the most ludicrous of all premises and plays it to the hilt, with equal doses of charisma and menace, and I really don't think he has ever been better onscreen since. Tarantino is surprisingly good, considering that his cameo in Pulp Fiction was so jaw droppingly bad, it threatened to bring that film to a crashing halt. He seems to find his niche pretty early on in the film, and does a credible job in his final screen performance. Harvey Kietel doesn't make a big impression, except for his chewy southern accent which you can tell he is struggling with. Also of note is Dawn of the Dead's Tom Savini as a trucker named Sex Machine, Fred Williamson (Shaft!) as a vietnam vet, and a very young Juliette Lewis as Kietel's sexy daughter. (Also, be on the lookout for cameos by some of Rodriguez's Troublemaker Studios regulars, such as Cheech Marin in a triple role.)

The film is gruesome, in extremely poor taste, overly violent, and ridiculous....so is there any doubt as to why I loved it? Rodriguez is by far the current reigning B-Movie king, having directed this, The El Mariachi trilogy (El Mariachi, Desperado, and Once Upon a Time In Mexico), a hilarious Sci-Fi send up (the Faculty), and, most famously, the three Spy Kids films. He uses his low bugets to create films that look better than most blockbusters and directs with a style that few people could duplicate, a mixture of Sam Raimi (Evil Dead 2), John Woo (Hard Boiled), and Sergio Leone (A Fistfull of Dollars). The script by Quentin Tarantino is gloriously self indulgent, literally bathing the characters, and audiences, in rivers of blood and carnage, and assaulting the ears with hilariously profane dialogue. The film owes a lot to the aforementioned Sam Raimi's Evil Dead trilogy, as well as George A. Romero(Dawn Of The Dead), Peter Jackson (Bad Taste, Braindead), and Stephen King (Salem's Lot, Pet Sematary) in equal measures. From dusk till Dawn has already earned it's midnight movie cult status, but if you haven't seen it, do your self a favor and do so.
» More about From Dusk Till Dawn
» More reviews of From Dusk Till Dawn
» More reviews by Monkeypunch