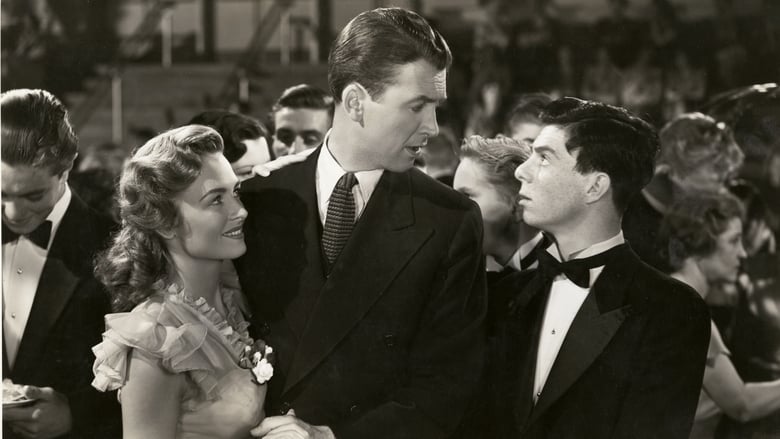 It's a Wonderful Life

When a humble family man who has sacrificed everything for the sake of his small hometown finds himself contemplating suicide on Christmas Eve, an angel is sent to Earth to help him see the error of his ways.

I think it's been close to a decade since the last (and first) time I saw It's a Wonderful Life, Frank Capra's cinematic fable about the resilience of the human spirit even in the face of seemingly mundane adversity. After a brief prologue frames the story as being told by one celestial being to another on Christmas Eve, the bulk of the film skims the life story of a young man named George Bailey (Jimmy Stewart). George wants nothing more than to get out of his pleasant but unremarkable hometown and have exciting adventures around the world, but a series of badly-timed mishaps constantly force him to shelve his dreams for the greater good. All of them just so happen to involve his father's loan business, which is constantly under threat of being acquired or shut down by a greedy businessman known as Mr. Potter (Lionel Barrymore). George still grows up, gets a job, get married to his high-school sweetheart (Donna Reed), and so forth, but his resentment of never getting to realise his dreams grows and grows and then just happens to hit breaking point one cold and wintry Christmas Eve...

There's not really too much that really needs to be said about It's a Wonderful Life at this point. It's definitely earned its status as a classic thanks to its ability to be sentimental without being totally mawkish thanks to its incredible dark side that bubbles under the film's friendly small-town surface. There's enough palpable nuance to the conflict that it has the potential to undermine the heartwarming humanism of the ending; the film had been famously investigated during the McCarthy witch-hunts over its supposedly pro-communism subtext, but one can still walk away from the film feeling like George's joyful epiphany and acceptance of his destiny has hints of Stockholm syndrome to it. With that in mind, it's a testament to the film's quality that it still feels at least a little emotionally stirring to watch despite one's conscious cynicism. I also have to concede that I do have a soft spot for stories that involve alternate realities, but I still admire how well It's a Wonderful Life goes about spending the bulk of its running time setting up its alternate reality. This much is true considering how well the makers develop this small but immensely detailed town filled to the brim with distinctive characters ranging from co-stars to bit parts. This serves to make the film's iconic third act all the more brilliant to watch as all the pieces fall into place for George. Helping things along is the way in which the performers act with gusto - Barrymore sinks his teeth into what is a fairly straight-forward villainous role, Stewart embodies all manner of emotions in combination with his usual marble-mouthed gosh-and-bother affectation as he begins an unlikely relationship with Reed, who provides a surprisingly believable mix of brashness and timidity. I don't think I'll watch It's a Wonderful Life every Christmas, but it's hard to think of a better example of a pure Christmas film.