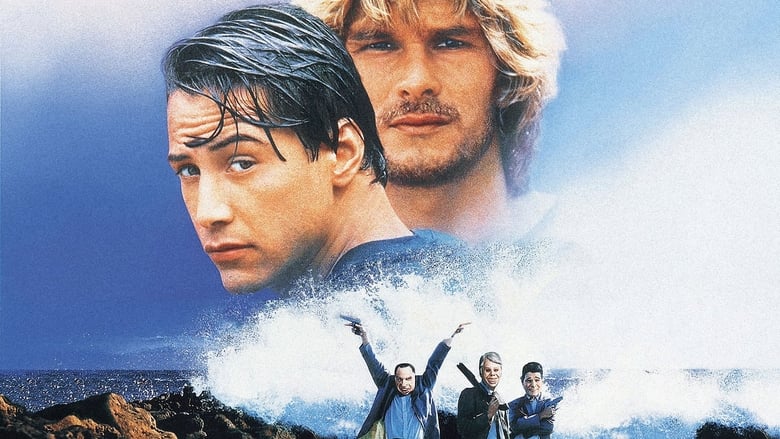 A rookie FBI agent must go undercover as a surfer in order to track down a gang of bank robbers.

No, this isn't the dire-looking remake that's due to hit cinemas around about now but instead it's Kathryn Bigelow's gloriously early-'90s action masterwork. The plot is quite the variation on the undercover-cop high-concept; it follows a rookie FBI agent (Keanu Reeves) as he is assigned to investigating armed robberies with a half-crazed veteran agent (Gary Busey). Their target is a notorious group of bank robbers known as the "Ex-Presidents" because of their disguises involving rubber masks featuring the likenesses of former U.S. presidents like Ronald Reagan and Richard Nixon. Since Busey has his own rather outlandish theory that the members of the Ex-Presidents spend their time surfing when they're not pulling heists, he works with Reeves to conduct an undercover operation that involves the latter attempting to infiltrate the local surfing community. This leads to him befriending a tough-talking female surfer (Lori Petty) and eventually ingratiating himself with an affably philosophical adrenaline junkie (Patrick Swayze). This is all the plot that the film really needs as it proceeds to pad out the proceedings with many scenes of extreme sports, cop-movie clichés, machismo-charged exchanges, and the occasional spot of straight-up action.

What could have been an obnoxious mess of a film turns out to be something more in the capable hands of future Oscar-winner Bigelow as she decides to do the material more justice than it arguably deserves. Reeves is frequently criticised for his wooden performances but here it makes perfect sense for a character that not only struggles with his undercover duties but also in convincingly portraying an extreme sports aficionado. Swayze, on the other hand, gets to channel his naturally strong sense of charisma into a character that shouldn't work but does as he combines beach-bum swagger with an earnest air of Zen philosophy. His rough but friendly coolness makes him the ideal foil for Reeves' stilted blank-slate and their chemistry in all sorts of circumstances; you can tell their action-buddy dynamic is strong because of how easily it invites interpretations involving homoerotic subtext (though not to the extent that Top Gun does). Other characters tend to fall by the wayside as a result, whether it's Busey's appropriately bug-eyed fed or Petty's sharp-tongued love interest, but the film wouldn't be what it is without them. Even John C. McGinley popping up as a stereotypical police chief kind of character makes an otherwise thankless role work.

Point Break could have easily coasted on the shallow thrills provided by its extreme-sports angle but Bigelow still manages to bring some panache to the technical proceedings, capturing everything from foot-chases to sky-diving with a kinetic yet coherent combination of techniques. There's a tactile, exciting feeling to the proceedings that helps to compensate for the many foolish ways in which Reeves' undercover agent and his handlers threaten to ruin the operation purely for the sake of providing action. Look no further than the scene where Reeves and Busey are staking out a bank that the Ex-Presidents are about to hit. I figure that it's a testament to the film's extremely silly but substantial amount of charm that it's able to get away with some more ludicrous developments and qualities. It may have plenty of issues, but Point Break manages to work because it not only avoids taking itself too seriously but does so without descending into dull self-awareness and banal comedy. If nothing else, it certainly beats several hells out of Bad Boys II.