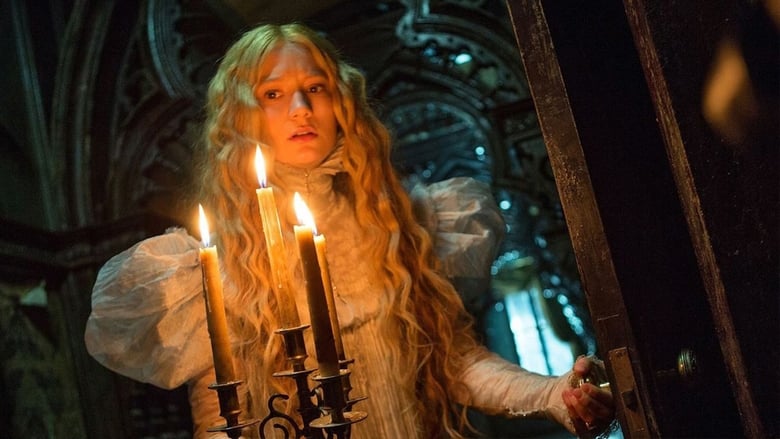 A young American girl ( played by Mia Wasikowska ) is warned by her mother who comes as a ghost after her death that she should beware of something called 'crimson peak' . As she grows older , she falls in love with a Englishman ( played by Tom Hiddleston ) who is not at all approved of by her father . Her father discovers some really bad things about this man and bribes him to leave her life . The young man agrees to move out .

Now why does the father not simply tell his daughter about what he has found about this man , so that she will herself know the truth ?? The director has no explanation for this .
Predictably , the father gets murdered by you know who and the young englishman moves back in the heroine's life .

The direction has no subtlety and the englishman's sister ( played by Jessica Chastain ) openly talks of her and her brother's sinister intentions towards the american girl---some mumbo jumbo about the girl being a butterfly and them being black moths who eat butterflies . Can it get more crude than that ??

So after marriage the couple move in back to England to the all-too-predictable huge black haunted mansion whose every wall shrieks 'horror' !!!---except that I was getting bored and not to affected by the horror at all . Then follows the same old routine that happens in every horror film---creaking doors , strange sounds , and the leading lady following each new sound with candles in her hand down dark corridors . We are supposed to jump in our seats when the ghosts finally appear---and I almost did , to get out of theatre out of sheer boredom . But something ( the moolah I had spent on the movie , what else ) held me back .

The ghosts were neither scary nor was the haunted mansion . They were in fact warning the leading lady about the deadly brother sister combo . The situation of the ghosts was pathetic---they were victims . So just as I was thinking that I was going to see some done-to-death scenes of horror I realised that there is a new twist to the story .

So how dangerous are the brother sister ?? Is the leading lady ever going to get out of the haunted mansion alive ?? Not worth going to the theatre for the answers....the movie isn't that good .

Towards the end , there is less horror and more thriller / murder mystery kind of situation as the truth about the siblings is revealed . You simply don't get the doses of horror you expected . And when I don't get what I expected I walk out of the theatre an unhappy man....and that reflects in my review.....

However , the movie has some class . Watch the leading lady waltzing with the Englishman holding a candle in her hand never allowing the candle to extinguish during the dance . Watch the nineteenth century atmosphere created perfectly by the director , both in America as well as England . The clothes worn by everyone are perfect , so is their nineteenth century english . Sadly , the touch of class does not save the movie .