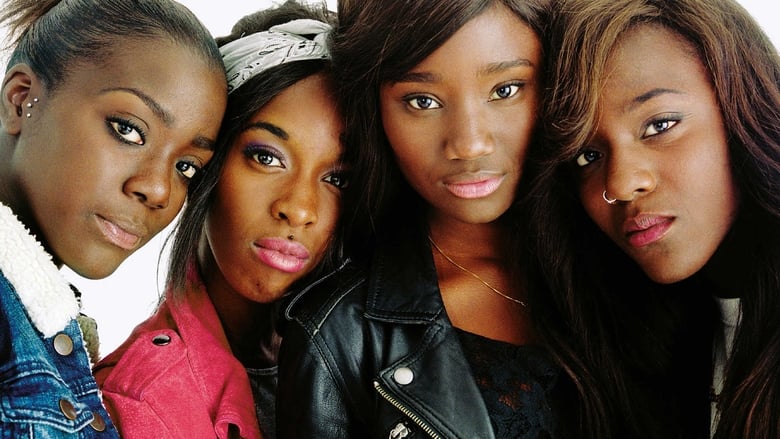 by ash_is_the_gal
posted on 8/17/15
in
Girlhood
2013, Céline Sciamma
A young girl from a Paris housing project comes out of her shell when she joins a girl gang and is introduced to the vibrant world out from under the controlling fist of her older brother.

This film's title loses some of its meaning in the English translation - its literal translation Bande de filles, or Gang of Girls, is more indicative of what this film is actually about. This female centric, coming-of-age drama focuses on Marime, a young girl from a housing project suburb in Paris. Marime is shy and inward, though over the course of the film we see her come out as she navigates through her day-to-day life and deals with issues surrounding her race, class, gender, and sexuality. Marime's world would probably seem outdated to the typical American audience of today - in Marime's world, a girl can't have sex with a boy she likes lest she disgrace her whole family, though the young boys can pretty much do whatever and whoever they want. Struggling with rigid sexist rules and the limited educational and job options offered to black youth, the young women of color in this film literally fight to escape poverty. They find strength, kinship, and safety in their gangs, and are often drawn to them to begin with because they are lacking those things in their own homes.

The gang that this film focuses on, Lady's gang, reluctantly accepts Marime as one of their own after she accompanies them on a trip to the city for a day of shopping/stealing, drinking, smoking, and doing whatever they like while having very little consideration or regard for anyone else. Marime, who becomes bewitched by this way of life, finds herself becoming stronger, more assertive as she slowly climbs her way up the status quo, from gang fighting to stealing, sex, and drugs.

While on paper the tale is repetitive, this execution is anything but. Marime may not know who she wants to become, but she knows what she doesn't want to be, (her mother is forced to work such a strenuous schedule as a maid that she is basically raised by her brother, forced to protect her younger sister, and look after them both in the meantime).

The director, Céline Sciamma, has said her inspiration for making this film was to give voice to women of color, specifically lower-class, French women of color, whose stories are very rarely told. This is exactly what she does. From the beginning, we see that these girls find their strength in numbers. From the opening sequence, we see Marime's sense of comfort after playing a spirited game of football with her friends before walking the gauntlet back to her apartment building. These girls may be uneducated, poor and have very little control over their lives, but they've learned how to survive and adapt in the streets of this poor suburb where you don't look a man in the eye while at the same time, holding your head high if he calls out to you.

Actually, it reminds me of Charlize's advice on 'how to walk like a queen."

Girlhood is as much of an emotional journey as it is visual. One scene in particular reminded me of some of the electronica dance sequences in Harmony Korine's 2013 Spring Breakers. In the scene in question, the girls, after having dressed up in beautiful, expensive dresses they never could have afforded to pay for, dance around their hotel room in carefree unison with one another to Rihanna's Diamond, a song I'd never heard before watching this film. While these girls obviously dream of a better life, they are, at least in this one instance, making the most of what they have now. It's a very moving scene, and with the song, the bluish tones and hues, and the actresses themselves, this couldn't be more fitting.

Do yourself a favor and watch Girlhood. You won't regret it.