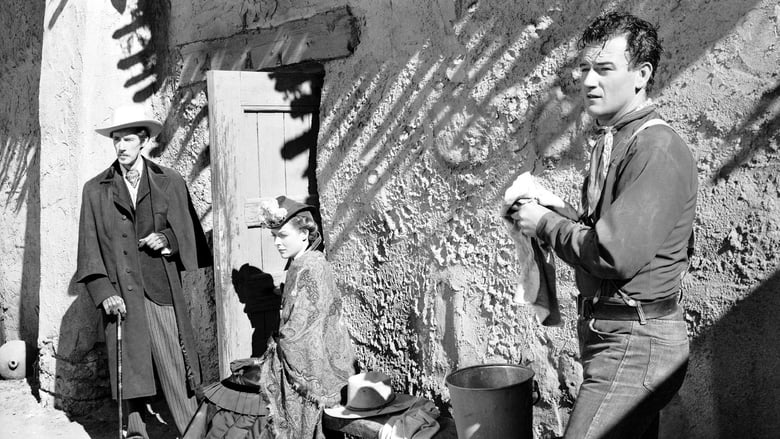 Dallas crouches in fear as the Indians approach the stagecoach

Stagecoach is not only an essential Western, but opened up a path for many future Westerns because it proved that Westerns could be profitable, after faith being lost due to many flops. I can easily see why this masterpiece by Ford raked in a lot of dough, it is the 1939 equivalent of a modern blockbuster packed with romance, action, charm, suspense, and any adjective that doesn't even give out a slight hint of cinematic artistry.

That's why Stagecoach should be criticized by how well it elevated a linear, extremely common story to a level of genius, which is the necessity of a truly great film, sometimes exceeding the value of an original and experimental film. Example: building a house of sand out of using your bare hands on the beach is brilliant - but if you can turn that house into a castle big enough for French taunting to take place, then that is an automatic unforgettable achievement. The revolutionary 1939 film is one of those movies that exceed it's premise and soar high into sky without ever looking back at the meagerly inventive starting line.

Stagecoach, out of all places starts off at a Stagecoach station. There, from capital A A-hole to capital Z Zany, assorted groups of people wait for a ride to accomplish their ambitious goals. The film focuses on a stage headed for Lordsburg, New Mexico. The passengers include Dallas (Claire Trevor), a banished prostitute, and accompanied with her is a drunken doctor called Doc Boone (Thomas Mitchell, who's character can be summed up as a dumbed-down, alcoholic version of John Belushi). There is also a pregnant Lucy Mallory (Louise Platt), who is traveling to meet her husband Luke Mallory, a Calvary officer. On the stage, driving, are squeaky voiced Buck (Andy Devine) and Marshal Curly Wilcox (George Bancorft) Lastly there is whiskey salesman Samuel Peacock (Donald Meek), and two others who are picked up later; gentleman gambler (John Carradine) and banker Henry Gatewood (Berton Churchill).

But no, that is not all the people I want to introduce in this review, there is an actor who gained instant fame from starring in this film as Ringo Kid, an outlaw pursued by many, including officer Luke Malary. His name is the one and only John Wayne, and because he was around his early thirties when he shot Stagecoach, even in my eyes, he looks beautiful. He almost brought out the secretly gay 13-year old boy inside of me, just almost.

In total, 7 people get on board the stage headed for Lordsburg, which just thinking about it makes you feel claustrophobic. Ford makes good use of this situation by capturing the overall mood of the passengers. When a certain character is talking, he focuses the shot not only on that character but also on the two or three people next to him, and it captures the various, little emotions that could have been easily missed. In one frame, there is a happy man, a nauseous lady. and another person who's mind seemed to has escaped their body.

Another sign of character from Ford is that all 9 main character are given their special moments. Half of the time, John Wayne or Claire Trevor isn't doing much of importance. It's the mildly amusing and helpless Doc Boone causing trouble (but ending up saving the day), or dim-witted stage driver Buck exclaiming a statement not fitting for a situation, as the scene lingers with an awkward silence, and you can't help but cringe just a slight bit. The timid and nervous whiskey seller Samuel Peacock is basically the running joke of the film, because his last name gets pronounced wrong every single time someone addresses him. Mr. Peacock obviously does not like Doc Boone at all, as the two frequently engage in minor quarrels. The plot is mostly driven by simple, but memorable dialogue, body gestures, and character. The greatest aspect of having a director great at creating a drama-esque film, is having the Western feel like a grandparent would tell you when you were younger, with a bit of heroic and comical exaggerations, instead of the true, hard grit.

The film is shot in black and white. This takes away the orange-shaded, magnificent, and visually appealing atmosphere of Westerns to some extent, but in Stagecoach the damage is minimum, rather, it builds on a handicap. Ford is famous for location shooting, and his good eye found quite a vast and glamorous landscape for an area located in the US. Long shots of meditating sand dunes and breezes scattering the drops of sun could have easily been shots where a new scene begins, or for a transition. But that didn't happen, because, again Ford is a natural storyteller. He lingers on dialogue and facial expressions, rather on action or artificial shots made simply for the purpose of moving on. The most movement he gave was the stagecoach driving from one end of the frame to the other. If you notice, there isn't a whole lot going on in his shots, what the characters are doing always make sense.

There is a romance between RIngo Kid and Dallas. Kid, unlike a lot of initial cynical and somber heroes, he knows he shines wherever he goes. Instead of being indifferent and seemingly rude at first, from the start whenever Dallas needs help Kid is there. We almost can't believe that Kid first ended up in the pen when he was only 17 years old. The two fall in love quickly, which lead to some cliched, but juicy lines; a woman's dream.

The trouble, or in other words the plot point can be summed up as when the express bus you're traveling on breaks down, but on a much larger scale with a lot of life-risking circumstances if you don't pay sharp attention and/or simply don't have much luck when it comes to survival. Buck, a Spanish man who helps them along the way, and a few others are reluctant about continuing their journey to Lordsburg when Geronimo (a famous Indian for those who didn't pay attention in class) and his men are headed towards their direction. But in the end the vote for carrying on despite dangers.

I am so thankful that the majority won, or else we wouldn't have seen some amazing action sequences that happens non-stop for 15 minutes. Even by 2015 standards, they take your breath away and absorb it, putting it on the screen so that you are completely glued. The chase takes between the stage and Indians on horses with arrows and occasionally rifles as weapons. Sure, I do love a good car chases, but when it comes to horses, you can feel a bit more tension and desperate speed, because the ones who are fighting are entirely breathing beings, not machines that can just be manufactured again. As Indians fly off horses, multiple horses and the stage are shown in one steady shot, and actual, raw damage being made, you can't but wonder how this was possible in 1939.

The awe reaches it's climax, for me, with a shot that has an almost impossible POV for that time - beneath the hooves of the Indians' horses. They ride above the camera as you feel like you are being crushed, and that was one of those moments when I realized I was watching a masterpiece. There is also one that is mentioned frequently, the one where an Indian is shot by Ringo Kid and falls between two rows of horses. Then, there isn't a fast cut, the camera lingers, this time not for a lasting effect of dialogue, but to show horses trampling over him as his lifeless body seems pushed back, contrasting with a forward motion. He risked his life doing that stunt, and it instantly makes your draw drop.

I do have a problem with this film - and that is the portrayal of Native Americas as mindless savages whose only pleasures in life are raiding innocent people. But a film represents the time it was made, and when the conceptions of that age do not interfere enough to break a timeless magic, then already a great film is born. Add that with a clear, and unbelievably entertaining anything possible, and you have Stagecoach.