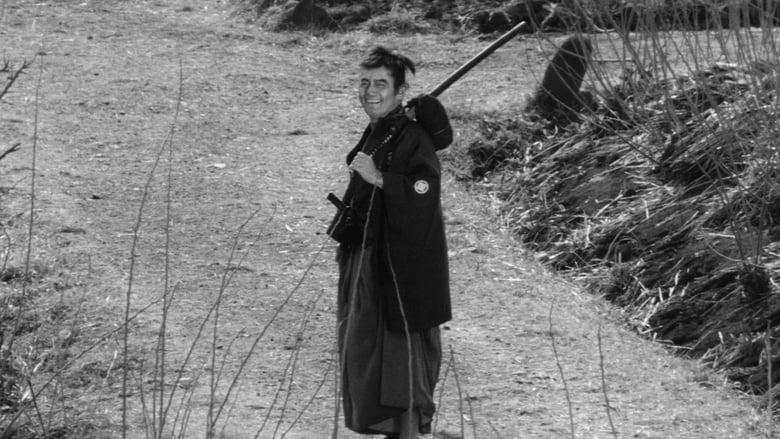 In feudal Japan, a wandering samurai arrives in a small town being torn apart by a gang war.

Yojimbo is an interesting film in that, despite lacking the scale or depth of Kurosawa's other classics, it still managed to build a considerable reputation that has led to it being hailed as one of Kurosawa's best films. I guess it's because it proves that a master capable of crafting lengthy epics filled with stunning characters and imagery can still put that talent to good use in a fairly straightforward action film with a single location and somewhat limited cast. To that end, Yojimbo does offer a fairly simplistic plot in having Kurosawa regular Toshiro Mifune play a samurai who happens upon a village that is caught in the vice-grip of a pair of gangs. After Mifune learns of the situation from an embittered innkeeper, he sets about trying to play both sides, ostensibly for money (the title is the Japanese word for "bodyguard", which Mifune offers to be for the bosses on either side) but soon reveals a greater motivation for his actions that mere greed.

One of the great things about Kurosawa as a director is his sheer dependability, which is on full display and elevates its rather basic narrative through the addition of some interesting idiosyncrasies. The film's most notable villain does change things up by having his own revolver (which did inspire an unexpected homage in 1979 gang flick The Warriors), the gangs' one attempt at open warfare results in a comical stalemate being watched by an amused Mifune, the gangs actually turn out to be stunningly incompetent in some areas (such as one woman advising her gang leader husband to murder Mifune after their rival gang has been eliminated while Mifune is in earshot), and so on. What few action sequences there are hold up well, with just the right blend of flourish and realism. The monochrome camerawork and jaunty soundtrack contribute to Kurosawa's trademark style and definitely make for one of his best films, none-too-complex subject matter notwithstanding.