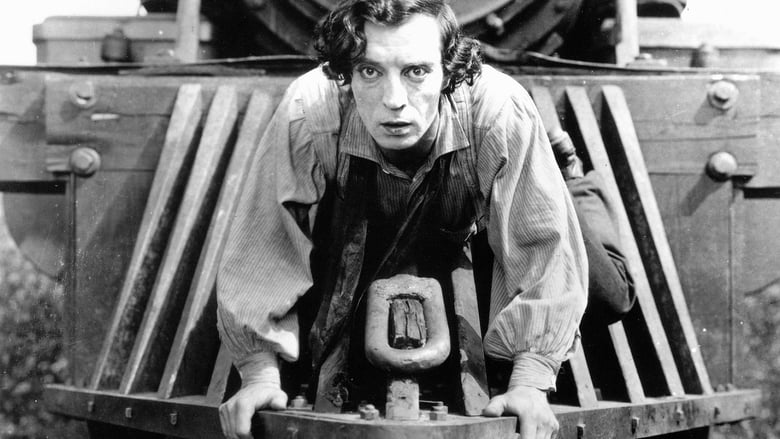 Oops.
The General is now the paradigm for silent films, but back when it first released that was not the case. Critics panned it and it failed to generate even decent profit. Like most films gradually gaining reputation upon re-evaluation, the brillance of the film locates high up in cinematic heaven, and so it soared above all initial thoughts and perspectives, thus could not be seen. It merely exisited in a distant future, or to be exact outside of time and trend, oblivious to those who didn’t give a closer look, and those were the original majority. The General is a silent film but the vibrant energy and figurative noise it generates is extraordinary. This film will be regarded as highly essential even when our world becomes dominated by the mechanical buzz of robots and the bustling created by futuristic vechiles. Sherlock Jr. is my favorite Keaton, but only slighty, The General is the crowning achievement.

Characters are of minimal amount and their traits are set up quickly. The hero of the film, Johnny Grey’s (Buster Keaton) sole treasures in life are shown immdieatly, using a text card which has a rustic charm to it. One is the fiery engine of his locomotive, the other is his young and beautiful girfriend, Annabelle Lee (Marion Mack). This makes the two characters and others in the film seem one-dimensional. The correct is pure, energetic fun boiled down to amazing sequences and straightforward no-nonsense. The entire plot is our hero being chased by the Union army, but doing nothing particularly wrong himself at first, then ascends into havoc. Imagine if the chase started from Keaton's character being a typical mean-spirited and lazy comical protagonist, which in reality has more of an antagonist trait. Making the audience laugh at someone's actions and at the same time feel empathy for him/her is not easy to pull off.

Thus, the humor comes from the above reason of why the characters and scenes are not one-dimesional. Cannon misfires and countless falls are plausible due to a proper setup and explanation. Johnny Grey is obviously in a dilema, having to choose how to get out of the mess while saving both his train and girl, while under stress and limited time. Another part of the humor comes from the everyday common things, like most great physical comdies would do. A good example is when Johnny accidentally destroys a water supply tank. The water sprays on the pursuing Union soilders exactly like how water exhaulting from a hose is supposed to spray, and the expression on their faces is priceless, I assume they actually got a strong spray of the high-pressure liquid.

The gags are captured as a whole, and doesn’t zoom in to get close look of characters making overly-comical faces, what modern comedies would do to create a few weak chuckles, so you are being reminded that what you’re seeing is SNL Skit: The Movie, and not an actual film. The General captures the moment like a painting or a picture, today we regard movies as “flicks”, but the true word, despite being unconventional, we should use is “picture”, and only to films that deserve the praiseful word. The word is unconventional today because there are no films deserving enough to be called by the p word. To compare and contrast, saw both Meet the Fockers and The General about exactly an year ago. I forgot most scenes and attempted humor in Meet the Fockers, and for the latter picture I remember every moment of it, and from what I have experienced, true art is not easily forgetable.

The General is silent, but your mind won’t be. Silent films provoke imagination more than usual films, because the conversations, accents and overall tone need to be imagined, as they can not be pointed out by text cards. Speaking of text cards, the cards could have been used every time the characters exchange dialogue, but there are more instances where it is left to your own interpretation. Maybe the reason behind this is text cards being a nusiance if used too often, however I strongly assmue Keaton being abeliever of his audience and wanted those who viewed his work to leave the theatre having their own vision and ideas about the film.

Keaton has infinete confidence about creativity, his most celeberated films have the most limited access to locations, all the fun happenning in an enclosed world that is what we see every day, but to a degree defies common sense, just enough to make a lively atmosphere, and not to cram in bizarre, semi-surreal sights and actions. And again, it is acceptable because the plot is full of basic desire and human emotion. It is different from the cynical actions in recent comedy, where humor is segregated from all elements which build a film, from the plot to the editing. The General is part of a short, golden age when the barrier did not exist.

The barrier does not exist, so the films flows freely, back and forth, and while it does often get lost in its own world, you wish the otherwordly exploration continues, as time flies too fast and jaws automatically drop as Keaton prances and leaps with a subtle grace, then falls flat on his face, another screw up. Absolutely magnificent.

Keaton’s face, The Great Stone, blocked the crashing waves, therefore we are luckily always welcome to view a flawless film crafted hand by hand with non-stop momentum. You might feel the remains of harsh erosion, but the marvel comes from it, The General is perfect piece of ancient, worn-out and tarnsihed art, which rightly are worth more. The only flaw I can think of is that the hero is on the wrong side of the war.