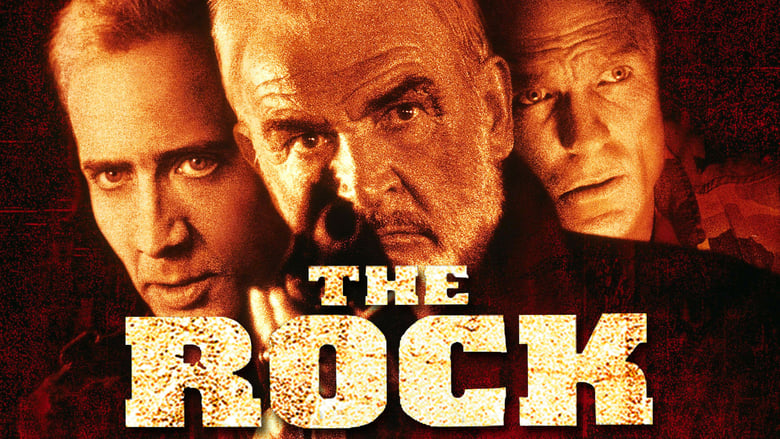 To sum up how I feel about The Rock, I'd have to use the meme based off those beer ads starring Jonathan Goldsmith, the one that goes; "I don't always like X, but when I do I Y." I don't always like Michael Bay films (actually never), but when I do I love The Rock. The only legitimately good Mr. Baysplosion film in my opinion, because it works as a somewhat exhilarating, suspenseful action piece with a lot of quality humor. Yes, I just used the words "suspenseful" and "quality humor" in a sentence to describe a Michael Bay film. I'm surprised too, but the film it just that pretty damn fine, considering how it could have easily ended up being a disaster.

The biggest difference from Bay's early years compared to recent activity is that he doesn't take himself seriously with loads of grandiosity to the point where we are repulsed by its belief that something plausible and coherent is going on. Sure, the plot about Alcatraz and our heroes trying to do something with typical scientific weaponry and theories in most 90s action films is already laughable and drags the film down, but it isn't Transformers where the story treats itself like a sci-fi semi-existentialism film.

The film has a good sense of humor that do involve Bay stereotypes but they are executed well without crossing the line and are timed to be released at a moment when they are needed. All this is backed up by the great acting, mainly a perfectly aged Sean Connery, and Ed Harris being Ed Harris, which is nice touch to the film. Nicholas Cage is also being Nicholas Cage but to be honest, he could have been replaced with any other actor and there wouldn't be any difference.

I believe Bay has talent, to some extent and it shows here. The pacing is a winner and it skillfully connects action scene to another action scene smoothly without having to put any forced exposition in it. It doesn't tell the audience the film is going to do this or that next. It just moves on, leading the film with a strong, rolling force. This is however, the cause of over-doing things as usual; such examples are the 136 minute running time and mercilessly used shaky-cam and cars that seem to have inflammable bumpers, headlights, and the weight of a toddler's tricycle, judging from explosions happening on contact and the cars being tossed 6 feet into the air.

The real cream of the crop happens at the final destination of the plot, the shower room of Alcatraz. It's probably the only time when Bay builds-up an atmosphere before having his orgasm. You can see the men at the bottom have no chance of getting out alive, but they try their best to defend against the torrent of bullets. The men on the upper floor on the other hand, know that this is an easy victory, and they pull the trigger vigorously. The former men are shown fighting in slow motion and grief; the latter have fast editing and camera movement, which shows contrasting psychological states. It isn't entirely brilliant, yet it shows the film' s decency and proof that it's more complex than people think, differentiating itself from the average pool.

Over-the-top, enjoyable enough, explosion rigged action and dark, claustrophobic action with a boring story in between but enough characters and jokes to cover it up is all about The Rock. It really isn't much, some parts do make you cringe and lament about them, I have never gone crazy for it but I am always glad to watch it. Whether it's because of the nostalgia, or because I love Sean Connery when he's old, bad-ass and not James Bond, I love this film. If Michael Bay is sensible enough he'll stop cannibalizing himself with Transformers sequels, and instead make The Rock 2. If he doesn't, I need tablecloth for the farewell party.