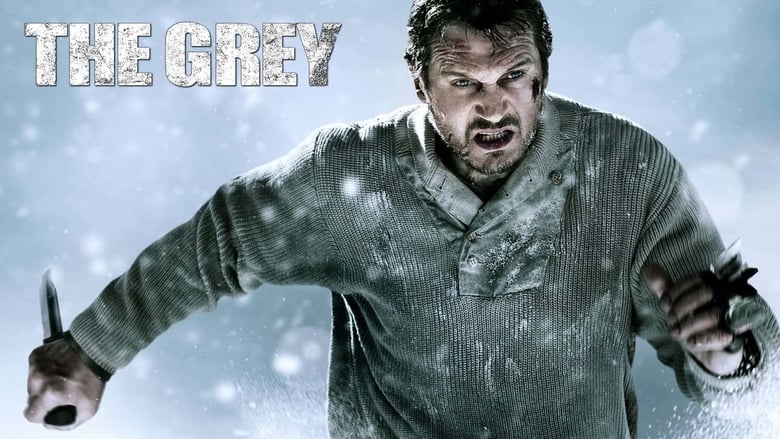 After surviving a plane crash in the middle of the Alaskan wilderness, a small handful of survivors have to contend with the harsh terrain and a pack of wolves.

I had heard enough about this movie to know that it wasn't just going to be Liam Neeson fighting off wolves for two hours and would actually attempt to tell a deeper story than its high-concept premise might suggest. In the hands of a better writer and/or director, perhaps that would be the case, but as it stands The Grey doesn't quite deliver the way that it seems to want to. After a meandering prologue that establishes Neeson's protagonist - an embittered game hunter tasked with shooting down wildlife around a remote oil drilling facility in Alaska - the plot truly kicks in when the plane he's on crashes. Neeson and his fellow survivors soon learn that they've not only crashed in the middle of nowhere, but they are also in the vicinity of a den of exceptionally territorial wolves. Though there is some dissent in the ranks, it is ultimately up to Neeson to try to lead the others to safety.

The Grey does have some horror elements thanks to the presence of the wolves, but their appearances are split between jump-scare attacks and non-violently stalking their prey. The wilderness also proves a formidable foe in many instances (often improbably so). Unfortunately, like too many mediocre horror movies The Grey also fails to develop a decent cast to care about, which is a problem considering how much the film actually emphasises psychological drama over high-adrenaline thrills. Aside from Neeson, the characters only get the slightest developments intended to make an audience care about them. The soft-spoken family man, the authority-challenging hothead, the motor-mouth comic relief...they're too thin to care about beyond their being charges of Neeson. Neeson himself doesn't get that much characterisation - while it's fun to watch him a gruff mercenary type thrown into a survival situation, his apparently tragic back-story is also rather predictable and doesn't offer much in the way of insight into either the character himself or the film's themes.

Even if you're supposed to take the ever-circling wolves and the icy landscape as some sort of extended metaphor for death or faith or whatever (which would presumably allow you to suspend your disbelief over sequences that defy wolf behaviour or even the laws of physics), The Grey is still a fundamentally mediocre movie. Having Neeson at the heart of the film plus some considerable technical competence only makes the film's most glaring flaws stand out even more. It can't even make its somewhat unexpected ending stick. While I'm fairly glad it didn't devolve into a ridiculous wolf-punching mess (no matter how fun that might have been), I'm also disappointed that it didn't quite deliver on the "meditative character study" front either.