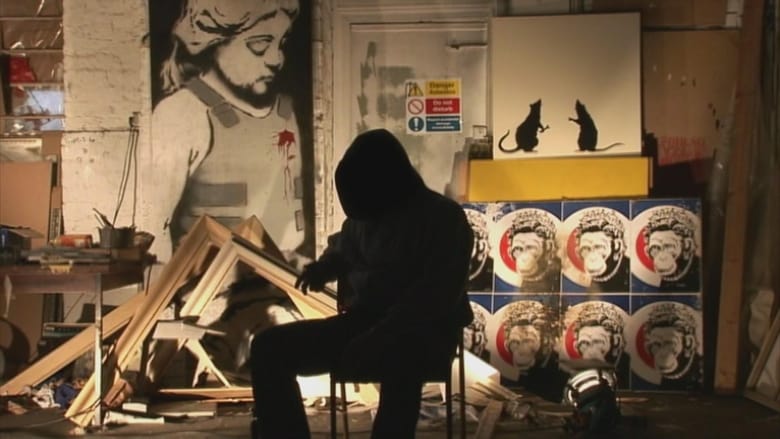 A documentary about the recent artistic phenomenon of "street art" that centres on Thierry Guetta, an amateur filmmaker who starts following artists from the movement and filming them at work.

It almost feels like a spoiler mentioning that Exit Through the Gift Shop is not actually about notorious street artist Banksy (as was my first impression), but actually about Thierry Guetta, a French-born clothes retailer whose obsession with filming his everyday life through a video camera leads him to become involved with street art after following around his cousin Invader. Banksy, showing himself as a faceless hooded figure with a heavily filtered voice, explains that Guetta's obsession with filming and street art ultimately makes him a more fascinating subject than Bansky and so the relationship between filmmaker and subject is subverted in an intriguing. True to Banksy's word, Guetta is a rather compelling figure to watch, if not necessarily the most sympathetic one - his obsession with following around street artists at the expense of his job and family doesn't exactly endear him, nor does his eventual decision to mortgage his clothes store and start making his own street art under the name "Mr. Brainwash". His obsession with filming also seems especially ridiculous considering that he ultimately ends up storing all his used tapes in his basement without ever watching them, which does make his claims of being a documentarian so as to have an excuse to film street artists seem especially suspect, even if that is the extent of his ulterior motives.

I wonder how much one's own opinion of street art comes into play when watching Exit Through the Gift Shop. On one hand, I appreciate the aesthetics used by the featured artists - examples include Invader's randomly placed mosaics of characters from the video game that is his namesake or Shepard Fairey's iconic "Obey" posters featuring the monochromatic visage of André the Giant. Banksy's own work is skilled on a technical level, but the extremely superficial nature of the sociopolitical satire that informs each image ultimately renders them rather ridiculous (and also Banksy himself by extension). What really makes the artists' work impressive is the length they go to in order to put it out into the general public. There is plenty of footage of artists being arrested by (or running from) police, to say nothing of the very dangerous actions they take to reach the ideal place for their art. The film's most unforgettable sequence might just be the scene where Banksy and Guetta set up a dummy of a Guantanamo Bay detainee at Disneyland, causing serious havoc in the process. The film's own preconception with the merits of street art and film in general come under scrutiny when Guetta's attempt to actually make his documentary ends up being an unwatchable mess, so Banksy decides to make his own film, reasoning that if Guetta can make one then it can't be that hard.

The film's finale, such as it has one, involves Guetta making his own street art under the name "Mr. Brainwash" and eventually putting on his own exhibition, though the preparation is fraught with difficulties such as Guetta being injured and being more preoccupied with publicity than putting on the show. In doing so, Guetta is established as a sort of antithesis to the anonymity-obsessed Banksy - even by the film's frequently appropriation-loving standard, Guetta's art doesn't look especially amazing or incisive on its own (oh, look, pictures of contemporary politicians made to look like Andy Warhol's Marilyn Monroe portrait, how droll). That is probably the reason why Guetta's show ends up being a massive success (much to Banksy's chagrin). Exit Through the Gift Shop may or may not be a massive prank on audiences as some have speculated, but whether it is or not is almost irrelevant. The film makes for a surprisingly well-made insight into the world of street art as filtered through the eyes of two radically different figures within the movement. Guetta's obsessive handheld camerawork provides the bulk of the film's footage and captures street art's do-it-yourself mentality perfectly. Incidental music by Portishead's Geoff Barrow and matter-of-fact narration by Rhys Ifans suit the film's vibe perfectly and definitely make for an intriguing (if not necessarily reliable) depiction of a major 21st-century art movement.