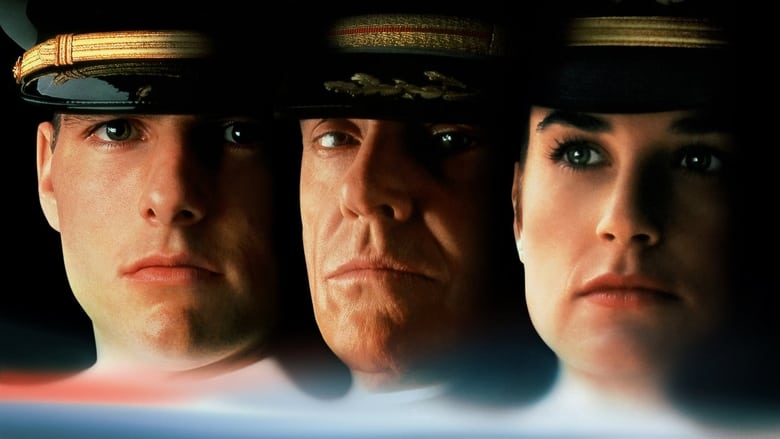 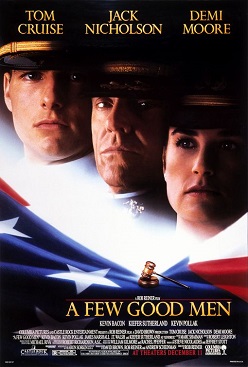 Neo military lawyer Kaffee defends Marines accused of murder; they contend they were acting under orders.

Rob Reiner puts together a pretty nice cast for the military courtroom drama, A Few Good Men. We begin down in Cuba, at the scene of the crime. Two soldiers are accused of murdering a colleague. The two soldiers claim that they were acting under orders, and never meant to kill their colleague. Enter Lt. Daniel Kaffee (Tom Cruise), the laid back Navy lawyer who has yet to work inside an actual courtroom. Joining his side are Lt. Sam Weinberg (Kevin Pollack), and Cmdr. JoAnne Galloway (Demi Moore).

I've never really noticed Demi Moore before, so this was the first time I really was able to pay attention to her acting. I thought she did well with some pretty talented support. Pollack was a nice little sidekick to Cruise, too. There is just something about his voice and demeanour that I find fascinating. It sometimes feels like he isn't even trying to act; he seems to effortlessly pull off his scenes, and it works well. I'm a pretty big Tom Cruise fan, and I found him so enjoyable to watch in this movie. His cool, laid back attitude made me feel like he would be invincible; until we see him start to breakdown under pressure and fear of failure. Overall, a pretty nice character arc.

In much of the early stages of the defense, Kaffee & Co. don't believe they have any real chance. Galloway tries to bring the moral up, but often fails or is put down by Kaffee. Although Kaffee seems to be holding his own against prosecutor Capt. Jack Ross (Kevin Bacon), we still feel that he's fighting an uphill battle. It is not until Kaffee, in a moment of clarity, makes a connection to a possible cover-up orchestrated by Col. Nathan R. Jessup (Jack Nicholson). This blows the case wide open and gives Kaffee that boost he so desperately needed to follow up on his initial suspicions.

Jessup repeatedly outsmarts Kaffee while on the stand. He then goes on to express his disdain Kaffee, as well as the court proceedings. I'm not experienced in courtroom etiquette, but after some surely unrealistic back and forth between Kaffee and Jessup, we finally get to the climax that we had been anticipating.