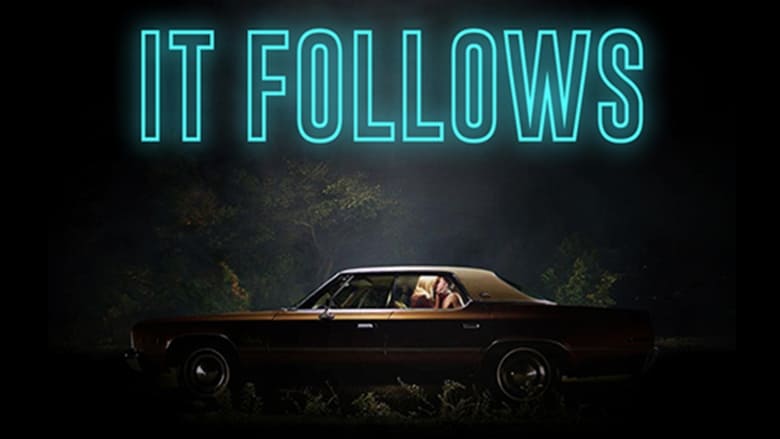 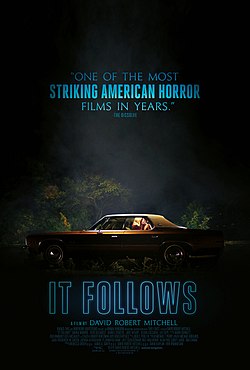 Hello MoFos! It is time for another installment of At the Theater with The Gunslinger45. Finally after getting my internet up and running I can now post the review that should have been posted last week. Again, I am sorry for the delay. When I went to the theater that week, we were still in the part of the theatrical release schedule that is not quite the crap of the dump months, but not quite the start of the summer blockbuster season. I was not interested in seeing the kid’s movie Home since it did not look all that appealing. Not to mention I am not that big on Dreamworks animated movies the way I am with Disney. And as funny as Kevin Hart is I am VERY hesitant to see his new flick with Will Ferrell, who is VERY hit or miss with me. One film caught my eye though. It Follows. A film in limited release advertised as a horror film that was described on Rotten Tomatoes as a “nightmare journey.” Horror movies that are good in the modern age are few and far between. Most are repetitive, cheaply, crap full of poor writing, terrible acting, and are nothing but jump scares. And critics and audiences alike have responded with generally negative reviews. Which made this film all the more intriguing as the film currently was sitting at a 95% Certified Fresh rating on Rotten Tomatoes with a 72% rating from audiences to boot. So I decided this will be my film for the evening. Now with a tag like that I was hoping for a surreal David Lynch style film. I was disappointed in that regard. But was I disappointed overall? Nope! This is actually a really good movie!

The film opens on a young girl running out of her house in the suburbs in nothing but a nighty and panties on. She hops into a car and immediately drives to a secluded area on the shore of some large body of water. The film takes place in Michigan so it is safe to say it is one of the Great Lakes. That night, the girl calls her father on her cell phone, gives a deep heartfelt apology and a tearful goodbye. The next morning she is found dead and disfigured. We then cut to yet another part of the suburbs and are introduced to Jay Height, a teenage girl in high school who lives with her sister Kelly and mother. We are also introduced to Yara and Paul. Both are childhood friends to the two sisters. We are also introduced to Greg, their neighbor, and to a boy named Hugh. Hugh and Jay go out on a first date to the movies. In line they decide to play a game of people watching. During the game however, Hugh becomes disturbed by something he sees. Jay cannot tell what he is talking about but it is enough for them to leave the theater. They go on a second date that ends with the two of them having sex in the back of Hugh’s car. But something strange happens. Jay begins noticing a strange figure of a nude woman walking slowly towards her and Hugh. Hugh gives Jay a cryptic warning about the strange entity coming near her saying it he passed it to her, and that she can pass it to someone else if she sleeps with them. If she does not, the creature will catch her and kill her. To make things even more complicated the creature can change its form and it looks like various different people in every scene. Hugh then drops her off at her house before disappearing into the night. The rest of the movie is Jay and her struggle to grapple with the reality of this … thing coming after her; all the while trying to convince her friends and family that this thing that only she can see is real. And that it is coming to kill her.

This film is awesome! The cinematography for the film is excellently done. Lots of complex and well crafted camera movements are put together to create a very well shot film. The acting is very good by general film standards, and excellent by modern day horror standards. The characters are distinct and avoid the stock character stereotypes you see in most horror movies. There is no A-hole jock, no stoner, and no school tramp. These characters are people. Some tend to look the part of slasher stock characters, but none act in accordance to those roles. The film does follow similar slasher rules in its story telling though. We have the entity set on killing teenagers, it is seemingly impossible to kill, it only walks and never runs, teens that have sex tend to die, and for whatever reason the police and parents are left out of the situation.

Which actually brings us to a major theme of the film. Sex. The entire film is based on the idea that for an unexplained reason this thing is set on killing teens that have sex. Now that is a standard slasher trope. It has been that way in all major slasher franchises from Friday the 13th, Nightmare on Elm Street, to Scream. But this film plays with that trope by having the sex be literally the thing that leads to their deaths. In slashers past it was more of a rule. In this film it is act X causing effect Y. Now, one could look at this as a commentary on the dangers of teenage sexuality and how it should not be taken lightly. Which I think is a legitimate interpretation, but it could also just be the director having fun with the subject matter. The film was influenced by a series of nightmares director David Robert Mitchell had. And he does seem to be well versed in the tropes of classic horror movies. But those classic horror movies generally were not really deep when it comes to subtext. Most were just meant to be fun. Now some have been praised by critics for their craft and or satirical value, but not a lot are praised for social commentary. So while the interpretation is still valid like I said, I still hesitate to say this is supposed to be a social commentary. Then again the creature takes on various different forms (including one that could be spoilers) and since I am not familiar with the directors other work, I could be wrong. I will leave that up to you. Either way I will try and pay more attention to that on the next viewing.

As I said the film was constructed by a director who is very familiar with the tropes of horror movies and seems to be influenced by two big name directors in the genre. The film is set in the Midwest, introduced in the suburbs, classic black and white sci-fi features play on their TV, has a slow lingering supernatural creature stalking a female protagonist, and apparently cannot be killed. This movie seems to take its biggest influence from John Carpenter and Halloween. This is also shown in the excellent cinematography, but also in the score. The movie score varies from time to time, but always seems to return to a synth like sound that reminds me a lot of John Carpenter’s scores. And much like Carpenter’s Halloween, this movie OOZES atmosphere! This movie knows when be quite; how to properly set the mood, and lets the camera and soundtrack tell the audience what is going on. But aside from Carpenter this movie has a secondary influence. All be it a more subtle influence. The in the move one of the first scenes is at a place called the Redford Theater in Detroit. Which was the first place that premiered a then unknown Sam Raimi’s film called The Evil Dead. Now this film does not have the practical gore effects (or much gore at all), but the film does have quite a few point of view shots that resemble the POV shots of the Deadites approaching the cabin in Evil Dead and Evil Dead II. Which was probably inevitable. After all, it would be hard to believe David Robert Mitchell was not influenced by fellow Michigan resident Sam Raimi in making this horror movie.

That being said there are a few nitpicks, but they are just that. Minor stuff like why is the car light on when Jay and Hugh are having sex, certain decisions made in order to try and see if the invisible thing is still after Jay, and few other little things here and there. But the film does its job so well, those issues do not stay in my mind for long and I can brush them aside. In all honesty there is very little about the film I can really talk about. I think it is a very good film. It is not the most original film, but it does take already familiar subject matter and does present it in a new way and does so in a very well constructed work. If you are a horror fan and want to see a good movie in the theater I say this is for you. Go see it in the theater if you can.