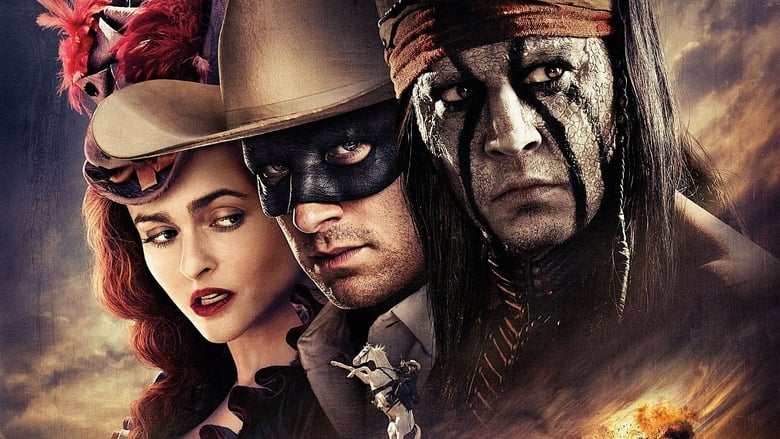 Plot - Native American Tonto (Depp) tells the story of how lawman John Reid (Hammer) became the legendary, masked figure known as The Lone Ranger. Tonto first encounters Reid when captured outlaw Butch Cavendish (William Fichtner) escapes custody, aided by his gang. Joining a group of Texas Rangers that include his brother Dan (James Badge Dale), Reid chases the wanted men but becomes the sole survivor of an ambush attack. Disguising himself from his enemies, who believe him to be dead, The Lone Ranger forms an unlikely partnership with Tonto and together they fight for justice against Cavendish and power-hungry railroad tycoon Latham Cole (Tom Wilkinson).

Back in 2012 Walt Disney Pictures released the big budget blockbuster, John Carter. Budgeted at a reported $250 million it was met with at best a lukewarm reception from critics and proved to be a massive and costly flop for the company. Fast forward a year and you'd be forgiven for suffering from a severe case of deja vu. Also released by Disney, The Lone Ranger rode into cinemas on a $250 million budget, received a critical hiding and rode back out of cinemas having grossed just $260 million, losing an estimated $160-190 million in the process. So as I said, deja vu. The thing is though, and this is why I wasn't completely writing this film off, that as it turned out I actually really enjoyed John Carter. Sure it certainly wasn't short of flaws but I found it to be a really fun and entertaining bit of pulpy sci-fi that wasn't deserving of anywhere close to the kind of pummelling it received. I was hoping this film was going to repeat the trick. Sadly that was not to be the case. The Lone Ranger pretty much does unfortunately live up to (or down to depending on how you look at it) the reputation that the critics bestowed upon it.

And the most disappointing factor about that is that I don't actually think this film is complete write-off. There are traces and hints throughout the film that this could have been a really fun piece of popcorn entertainment; sadly those traces and hints are largely enveloped by the film's exceptionally bloated running time. It kind of reminds me of what sculptors say (ok I know that sounds pretty weird but stick with me

). On a number of occasions I've heard and seen sculptors talk about how the sculpture is already fully formed within the block of marble (or whatever material they are using); their job is just to remove the unnecessary pieces to reveal it. I think there is a good summer blockbuster in here somewhere; they just had to chisel away a few more rough edges. Amongst the film's pluses are the fact that it does actually have a couple of very entertaining set-pieces in its arsenal; large-scale sequences which feature the occasional spark of creativity and evoke the madcap logic of a Tex Avery cartoon. And thanks to the efforts of Depp as Tonto, and Silver (aka the comedy horse), there are a few laughs to be found. The film does also look rather fantastic on occasion, the cinematography of Bojan Bazelli evoking classic westerns of old with its endless expanses of desert and sweeping sky of a canvas.

As I noted above, arguably the film's biggest flaw is its terminally long running time that closes in on two and half hours in length. Now I know that these days that's actually a fairly standard running time amongst films of this nature; the first Pirates of the Caribbean film which this was clearly modelled on for instance clocked in at just six minutes shorter. But in this instance it doesn't feel like there is anywhere close to enough going on to justify it. While it's story is actually quite simple the film does its best to make it as convoluted and bloated as possible. As a result it creates several very lengthy stretches where the film falls into a deep lull; a cardinal sin for a film hoping to kick off a new blockbuster franchise. No matter how poor a would-be blockbuster is it should never be boring, and if it is then you're in trouble. To tell the story the film employs a framing device that just falls completely flat; it sees Depp as an elderly Tonto relaying the story to a young boy at a Wild West sideshow at a fair. On paper it might sound like a sweet idea but in reality it serves pretty much no purpose whatsoever to the story. The film returns to this every so often and all it does is slow things down, further bloat the running time and take you out of the film.


Film Trivia Snippets - In an interview, Johnny Depp thanked his stunt horse, Scout, for saving his life after a violent fall during filming. After Scout dragged Depp 25 feet, Scout jumped over him to avoid stepping on him. A clip of the fall shows the horse clearly jumping over Depp, and detaching him from the saddle. Depp suffered only minor bruises and scrapes, but says it could have been a lot worse if the horse had stepped on him. /// As an homage o John Ford, the scene that introduces John Reid features passengers singing "Shall We Gather At The River". It was Ford's favorite hymn, included in at least five of his movies. /// Tonto means "fool" in Spanish. In Spanish versions of this film, Tonto is renamed Toro, which means "bull". /// This is now the sixth film in which both Johnny Depp and Helena Bonham Carter have worked together. However it is the first not directed by Tim Burton. /// Johnny Depp's makeup and costume were inspired by artist Kirby Sattler's painting "I am Crow". /// This is the first version of "The Lone Ranger" in any medium in which the actor playing Tonto receives top billing. /// The "frame story" where young Will meets the old Tonto, takes place in 1933, year of the first Lone Ranger radio broadcast. /// Jessica Chastain and Abbie Cornish were considered for the role of Rebecca Reid, but lost out to Ruth Wilson. /// This actually is not the first time Johnny Depp has played the part of a Native America. He played Rafael, a Native American, in his directorial debut, The Brave, which due to bad reviews at Cannes was never released in the USA.
The other major flaw here is the film's tone. In fact it's such a problem that more often than not it almost feels like the cast and crew were under the impression they were making two different movies. Johnny Depp, and to a lesser extent Armie Hammer seem to think they are indeed making a fun summer blockbuster, really trying to push the fun side of things. The larger majority of individuals however seem to think they're making a serious, and at times quite dark, straight-up western. Even the aesthetic of the film seems to differ from what you'd expect; eschewing the bright, primary coloured world you would normally find in a blockbuster in favour of a much more drab, drained colour palette to reproduce the dusty, murky world of the Wild West. And for a Disney film being pushed as the 'new Pirates of the Caribbean' I really was surprised by just how dark and sordid a territory it had a tendency to wander into; the dark and violent origin of Tonto, numerous killings and murders, the brothel, the slaughter of a Native American tribe....oh and then there's the cannibalistic villain! That's right, the film's villain is a cannibal who eats the body parts of his victims. At one point he actually cuts the a man's heart from his chest as he lies dying and eats it. With this dark, sinister edge going hand-in-hand with its more farcical, slapstick approach it makes for an awkward, unwieldy marriage.

Johnny Depp delivers what has kind of become his standard, go-to performance over the last decade or so. In many respects it's the same quirky, kooky turn we've seen in Charlie and the Chocolate Factory, Alice in Wonderland and the Pirates of the Caribbean series just with a slight variation. In fact you really wouldn't be all that surprised that if during the film Tonto washed off his face paint and removed the dead bird that adorns the top of his head to reveal that it has actually been Jack Sparrow in disguise all along. His performance is a bit hit-and-miss in truth. He plays the character with a great oddness which at times comes off as irritating, but at others entertains and does provide just about every laugh to be found. Depp is such a big star and such a cinematic mainstay that the failure of the film will not to anything to dent his reputation and standing. His co-star, Armie Hammer, however may not be quite so lucky. A bit of a rising star in Hollywood this film really could derail that ascension. And his fairly lifeless performance certainly won't help. Though to be fair to him much of that is likely down to the poor writing that lumbers him with a dull character. The Lone Ranger is a pop culture icon and yet the writers manage to make the character and his story completely flat and unengaging. Helena Bonham Carter adds some colour as Red Harrington, a one-legged brothel madam whose other leg is made of ivory. She is about the only person other than Depp to come close to generating some laughs

In the film's closing image Armie Hammer is finally given the opportunity to utter his character's iconic line of “Hi ho silver, away!” Tonto responds by telling him “don't ever do that again.” No need to worry Tonto, neither you or cinema audiences are going to be hearing him say that again anytime soon.

Conclusion - While this may never have had a chance at matching the delightful exploits of the first Pirates of the Caribbean film, I do feel there was some potential here for it to be an entertaining film in its own right. And the film certainly does have its moments but it's never able to completely overcome its flaws, especially that hideously overlong running time. I would say though that I think there's a small chance it could grow on me a little bit over time.
» More about The Lone Ranger
» More reviews of The Lone Ranger
» More reviews by JayDee