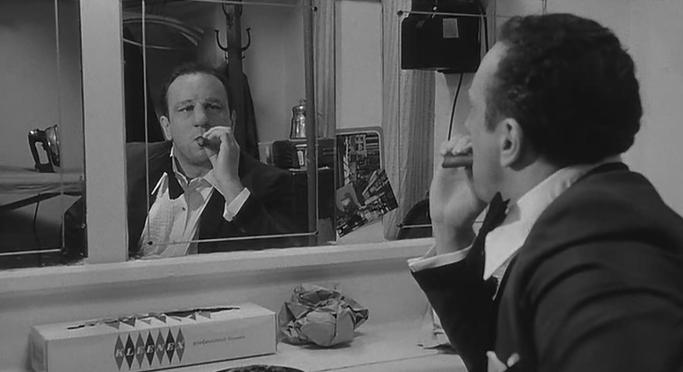 Simply calling this a film about boxing or about sports doesn't do this masterpiece by Martin Scorsese justice. Scorsese follows a fictional version of real-life boxer Jake LaMotta (there are no words that can describe the brilliance of De Niro's acting performance in this film) and deeply analyzes the philosophy and psychology behind the character and his unusual environment.

It's interesting that I've just seen Wong Kar Wai's The Grandmaster two days ago (be sure to check out the 130 minutes long Chinese version, because it's a fantastic movie), because I think both films have a lot of thematical elements in common. Not only are some of the slow-motion action sequences very similar to eachother in style, but both films also elevate above their specific genres in identical fashion.
Scorsese and Wong Kar Wai are not really interested in the purely entertaining side of what they're portraying (even though both films are highly enjoyable to behold), but they want to say something more thoughtful and "true" about their subject.

Scorsese finds truth in Raging Bull by truly giving us a look inside the psyche of his main character. We witness his everyday life, his specific rituals, the commitments he has to make and the aggression and lust for violence that lies within him. The film isn't afraid to be brutal sometimes, but at the same time Scorsese also didn't shy away from showing the epicness of it all, the phenomenal "larger than life" feeling that stardom (in the boxing ring) provokes. It's hypnotizing and addictive, but also oddly paranoic. LaMotta wasn't mentally prepared for the latter and therefore slowly grows into a monster. Scorsese lets us truly dive into the rich thematical kingdom of the dark side of the human mind and cleverly portrays it both seductively and repulsively (like he does in some of his other briliant films that are centered on the human evil).

Above all, the film is also the perfect example of a purely cinematic experience. Raging Bull makes us perceive things like we've never done before, often exclusively through the force and impact of moving images and sound...