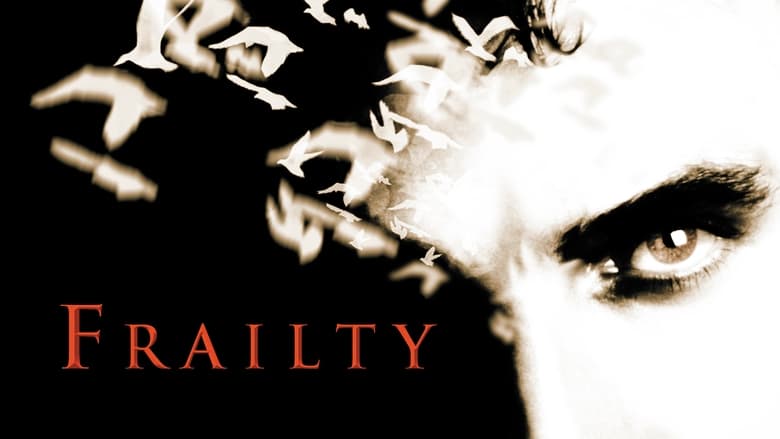 by JayDee
posted on 12/16/14
in
Another slice of McConaughey, though this time it's pre-McConaissance

-
Plot - Fenton Meiks (McConaughey) walks into an FBI office late one evening and announces that he has information about a serial killer known as the God's Hands Killer, but that he will only talk to the lead investigator on the case, Agent Wesley Doyle (Boothe). When Doyle arrives, Fenton tells him that he believes his brother Adam, who has just died, is the killer. Initially skeptical about his claims, Doyle becomes more and more convinced the longer Fenton talks. After admitting to stealing his brother's body and an ambulance so that he can fulfil a promise to bury him in the "rose garden", he goes on to tell him a tale of their childhood. He describes how his father (Paxton) came to believe that God had talked to him and given him a divine mission to become an demon-slayer. Completely convinced by the delusions, their father began to enlist the two young boys as accomplices in his demon slaying ways. While Fenton rejected his father as being insane his brother saw his father as a hero and bought into his delusions. And Fenton now believes that his brother is carrying on their father's work.

A subtly creepy and unnerving little film this one. It really is a very eerie and atmospheric effort. Much of that can be attributed to the excellent performance of Bill Paxton. Paxton, an actor I've always enjoyed watching and who I think deserves a lot more plum roles, plays the part of the father with such conviction that you really start to question your initial assertions that his visions are purely the result of mental illness. Paxton seems to believe in their authenticity with such unshakeable belief that he makes us wonder ourselves. His character is actually quite a complex one because despite of the atrocious acts he commits he is not a completely evil individual. We see that he is a loving father who believes he's doing the right thing with a genuine sincerity. He just happens to be a man who has become lost in his delusions. Through his character the film also highlights the hugely detrimental effect that mental illness can have not just on the individual, but those surrounding them. Additionally the film is an exercise in the dangers of religious obsession and fundamentalism.

I was slightly disappointed to find how minimal the screentime of Mathew McConaughey actually was. I was under the impression that he was the main star here but unfortunately he is relegated for much of the film to the role of narrator. In his sadly brief time on screen however McConaughey is still able to make a sizeable impression. His Fenton Meiks is a tremendously brooding figure, one with the haunted nature of someone who has gone through such an ordeal. Special mention too has to go to both young boys in the film, Jeremy Sumpter and Matt O'Leary. Performances from child actors are always very hit-and-miss at the best of times, but when you take into account the difficulty present in this particular situation then I think they both deserve to be commended, particularly Matt O'Leary as young Fenton. Credit also to Paxton for the performances he was able to draw out of them.


Film Trivia Snippets - Following its release, Frailty achieved acclaim from several noteable sources. Film directors James Cameron and Sam Raimi, and legendary author Stephen King all lavished high praise on it. King actually thought it was the best horror film of the year. /// Bill Paxton had to use the same beer can throughout the entire filming of the movie because they could only find one single Hamm's beer can like that from 1979. The can was "opened" off-camera and a sound effect added for popping its top each time a new one was opened. /// The demon-destroying axe is inscribed with the letters OTIS. The significance of this writing is never given. Fans have speculated that Otis Meiks is the true name of Bill Paxton's character "Dad." Others believe OTIS to be an acronym for Only The Innocent Survive. /// Frailty was loosely based on the case of American serial killer Joseph Kallinger who murdered three people and tortured four families. He committed these crimes with his 13-year-old son Michael between 1974-1975 in New Jersey. Kallinger pleaded insanity, claiming God had told him to kill.
Alongside Paxton's efforts in his day job as an actor, just as if not even more impressive is his work behind the camera. This film marked his directorial debut but I certainly don't think you'd be able to guess it. It's a terrifically assured and accomplished effort that when combined with the cinematography of Bill Butler and his moody lighting makes for a very atmospheric venture. In a way it's quite a deceptively simple, even old-fashioned tact he adopts. The material could very easily call for a more lurid interpretation but Paxton instead underplays it for a more restrained film. It makes the potentially trashy story more realistic and a great deal more unsettling. His pacing is quite deliberate, his camera generally quite static and very controlled and its score fairly minimalist though undoubtedly haunting. For a 2001 film it's quite surprising to find that Frailty wasn't conceived in a much flashier, more MTV kind of style. By avoiding this however, Paxton created a film of great tension and suspense that is never alleviated by a cheap scare.

Paxton realises that the horror is not to be found in the actual killings; as a result the series of axe murders all occur offscreen and there is an almost total absence of blood. He instead realises that the real horror lies in the situation that the boys find themselves trapped in. The film initially presents the Meiks' as a normal, happy family with the two boys living perfectly normal childhoods. With the arrival of their father's first vision however their lives quickly descend into a nightmare. While the resulting story may stray into quite outlandish territory, the core concept really is quite a nightmarish one. Trying to imagine what you'd do if you were placed in such a horrible, unbearable situation is an uncomfortable notion to consider.

My only major complaint about the film was its twist conclusion. Alongside the fact that I saw it coming quite a ways off it also felt just a little bit forced to me. It felt like the film had been forced into having a requisite shock at the end because it was the expected thing in the climate of thriller/horror films of the time, a notion that could easily be attributed to M Night Shyamalan and his work on The Sixth Sense.

Conclusion - The issue over its ending aside, I found Frailty to be a very impressive debut effort from Bill Paxton behind the camera. With strong direction and performances it's an unsettling little film that just reeks with a terrific Gothic atmosphere. And based on this evidence the fact that Paxton has seemingly abandoned his directorial aspirations seems like a great shame.
» More about Frailty
» More reviews of Frailty
» More reviews by JayDee