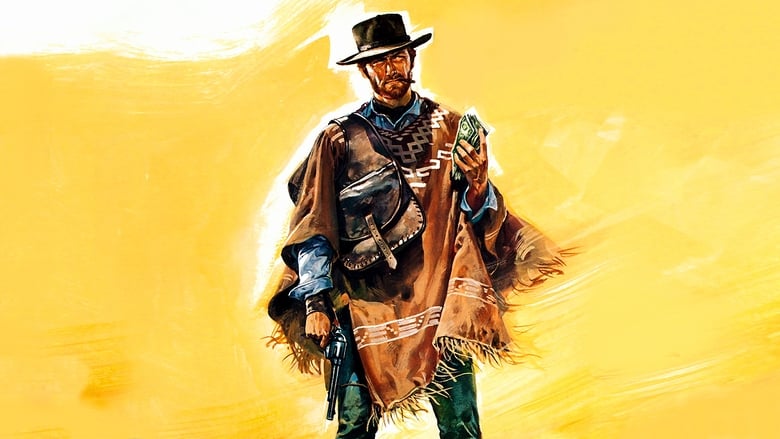 A Fistful of Dollars was the first of the now-iconic Spaghetti Western trilogy by Leone. And what a cinematic achievement it is for the time. Eastwood strides into film lore as confident as anyone before or since. His "The Man with No Name" character, known here simply as Joe, is one of the cinema's icons, predominantly remembered from the 1966 The Good, the Bad and the Ugly. This is perhaps as good, certainly not far off in terms of the end product.

Firstly, the cinematography is stunning. From the long shots of the barren desert landscapes to the close-ups of the grungy, sweaty faces coated with dust and dirt, it looks fabulous. The budget constraints and lack of resources are notable, in comparison with Leone's later films, but ironically those constraints actually show this to be even more of an achievement.

The acting isn't anything to write home about, but it doesn't need to be. Eastwood, ever the taciturn figure, delivers a performance that still manages to strike his character into film history without uttering a great deal of dialogue; Volonte and co provide villains that are fairly one-dimensional but still watchable. But these aren't serious flaws. They don't detract from what is a very accomplished nascent western from Leone.

Morricone's soundtrack is incredible; he would go on to create even better scores in For a Few Dollars More and The Good, the Bad and the Ugly, but the one here is not far off the quality of those. A true great in the world of film composers.

This is a cracking opening to the aforementioned trilogy, and one that will forever be one of my favourite westerns. It's simple, well-made (even despite the budget issues), iconic, and has a wonderful Morricone score. Oh, and it has Clint Eastwood. What more could you want?

Quotes
Joe: When a man's got money in his pocket he begins to appreciate peace.

Joe: I don't think it's nice, you laughin'. You see, my mule don't like people laughing. He gets the crazy idea you're laughin' at him. Now if you apologize, like I know you're going to, I might convince him that you really didn't mean it.

Trivia
Clint Eastwood helped in creating his character's distinctive visual style. He bought the black jeans from a sport shop on Hollywood Boulevard, the hat came from a Santa Monica wardrobe firm and the trademark black cigars came from a Beverly Hills store. Eastwood himself cut the cigars into three pieces to make them shorter. Eastwood himself is a non-smoker.

Originally called "The Magnificent Stranger", the title wasn't changed to "A Fistful of Dollars" until almost three days before the movie premiered in theaters. In fact, nobody had bothered to inform its main star, Clint Eastwood, of the change, and as a result Eastwood remained virtually unaware of the positive buzz surrounding the movie until an agent pointed it out to him in a Variety Magazine article three weeks later.

After considering Henry Fonda, director Sergio Leone offered the role of the Man With No Name to James Coburn, who proved too expensive. Charles Bronson then turned it down after describing it as the "worst script I have ever seen". Third choice Richard Harrison also declined the role but pointed Leone in the direction of Rawhide (1959). Leone then offered the part to "Rawhide" star Eric Fleming, who turned it down but suggested his co-star Clint Eastwood for the part. The rest, as they say, is history.