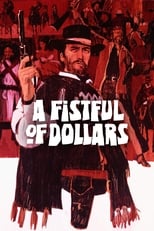 Release: Sep. 12th, 1964
Runtime: 1 hour, 39 minutes
The Man With No Name enters the Mexican village of San Miguel in the midst of a power struggle among the three Rojo brothers and sheriff John Baxter. When a regiment of Mexican soldiers bearing gold intended to pay for new weapons is waylaid by the Rojo brothers, the stranger inserts himself into the middle of the long-simmering battle, selling false information to both sides for his own benefit.

We didn't find any linked discussions for this film. Here are the results of a quick search of possibly related threads:
21 Yojimbo vs A Fistfull of Dollars
It's gonna be a really quick thread. I have been arguing with Derek Vinyard about the fact that Fistfull of Dollar is a remake of Yojimbo so that without Kurosawa their wouldn't be A Fistfull of Do...
1 Dollars/Spaghetti Westerns Trilogy
I have justed finished watching the classic "Dollars/Spaghetti Westerns" Trilogy on Blu-Ray for the first time, yes i know "how can i only just be getting around to watching these class...
122 Would you sleep with Robert Redford for a million dollars?
With Spy Game being released this week, it's time to ask ourselves that inevitable question. So would you? I've always found Redford hard to take as a sex symbol. He's got the whitest teeth on th...
14 For A Few Dollars More (1965) VS. The Great Silence (1968)
I love Spaghetti Westerns and out of all that I have seen, I would say these two are the best ones. But which one do you think is better would you say?...

Iroquois Watching this so closely after watching Yojimbo means it's easy to pick apart how closely Leone follows Kurosawa, but with a film this simple it's good that it sticks pretty closely to the original with only the occasional concession to the difference in settings (such as dropping the sub-plot about....
READ REVIEW

Jack1 In fact, nobody had bothered to inform its main star, Clint Eastwood, of the change, and as a result Eastwood remained virtually unaware of the positive buzz surrounding the movie until an agent pointed it out to him in a Variety Magazine article three weeks later.
READ REVIEW

pahaK A Fistful of Dollars isn't the most beautiful Leone film but it still looks great and Morricone's soundtracks are always excellent.
READ REVIEW
View All (5)