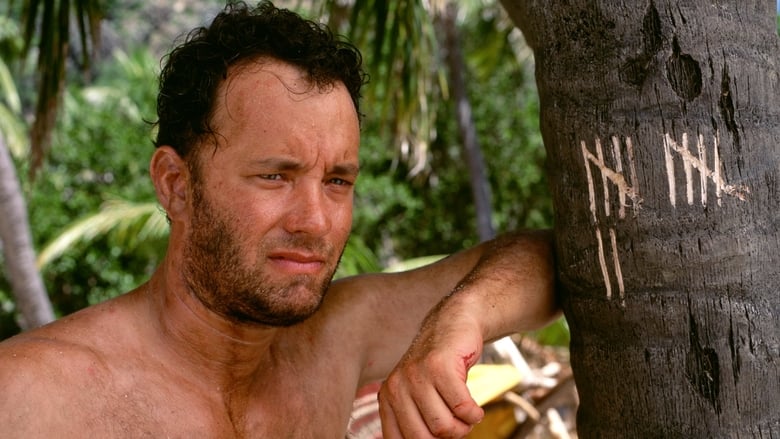 After winning Oscars for Forrest Gump, star Tom Hanks and director Robert Zemeckis teamed up for a 2000 epic called Cast Away, a compelling and well-made drama but, for me, a very difficult film to watch, with minimal re-watch appeal. 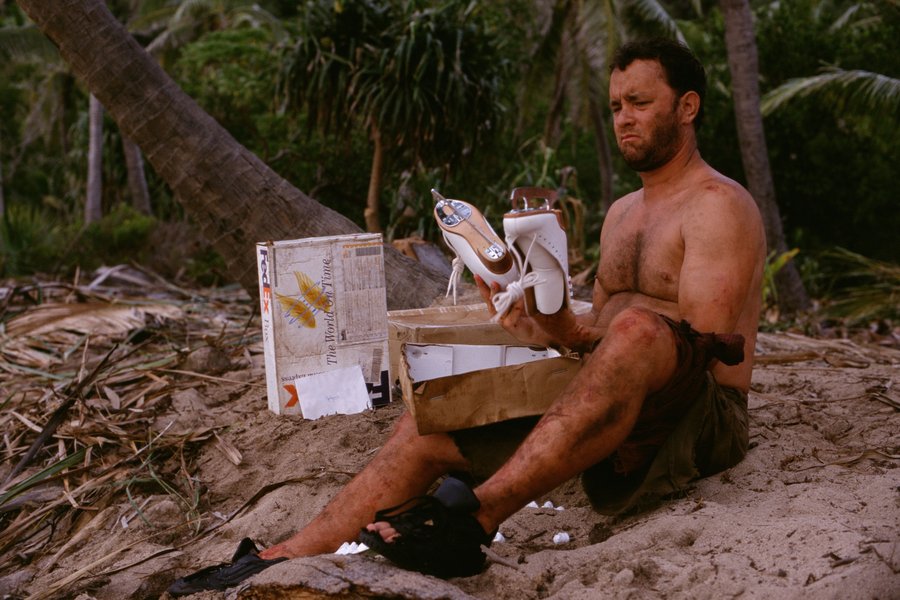 Hanks plays Chuck Noland, an executive with Federal Express whose life is changed forever when he is involved in a plane crash, which he survives and ends up stranded on a deserted island for four years. No episode of Gilligan's Island here as we watch this man, initially in denial about what has happened to him, anticipating rescue in a few days but as time passes, he can no longer deny what is happening to him and must learn how to survive, while simultaneously trying to cling to his sanity, evidenced in an actual relationship he develops with a volleyball, which he names WIlson and takes care of like a newborn baby.

This film is challenging because it goes places where other plane crash dramas have never gone. For example, there is a horrific moment when Chuck actually discovers the body of the pilot of the plane and goes through his wallet. I don't ever remember a film like this where the body of someone who didn't survive was even mentioned let alone revealed. The film also takes its time in having Chuck accept his plight. I like the way Chuck keeps his clothes on initially because he really thinks he's going to be found quickly, but eventually he starts wearing less and less to the point where he is just in a loin cloth and his pants are now covering his head. Even common health issues come to the surface here when Chuck develops a toothache and has no choice but to pull the tooth out himself, a scene I literally cannot watch anymore.

Director Zemeckis employs a keen eye for detail and realism here...this film contains what is probably the most frighteningly realistic plane crash I have ever seen in a movie. The moments before the plane hits, the panic in the pilots voices, Chuck's iron-fisted clutch of a picture of his fiancee (Helen Hunt), it all rang true and was just horrifying to watch and when Chuck was literally underwater trying to fight his way out of the plane, I was literally holding my own breath. Another Zemeckis touch to ensure realism is that after the initial scenes up to the plane crash were filmed, he shut down production of the film for a couple of months to give Hanks time to lose 30 pounds, to make his desperate diving for fish in the ocean look more desperately authentic and to show that Chuck was no longer eating regularly.

Zemeckis also knows how to make his viewer squirm, particularly in his depiction of Chuck's relationship with Wilson...the moment when Wilson falls off the raft and Chuck is unable to save him is heartbreaking and pathetic. You feel for Chuck while at the same time, you can't help but think, "Uh...it's a volleyball."

One of my absolute favorite cinematic pictures occurs in this film as well...the shot of Chuck's raft quietly floating in the ocean as a giant ship floats by right next to him.

This film is beautifully made and tells a very difficult story. Tom Hanks received a richly deserved Oscar nomination and Helen Hunt makes the most of her small role as his confused fiancee, but this film is really hard to watch. Putting myself in Chuck's shoes was a very uncomfortable experience that I don't wish to duplicate. It's a superb movie and I'm glad I saw it, but I have no desire to ever see it again.
» More about Cast Away
» More reviews of Cast Away
» More reviews by Gideon58