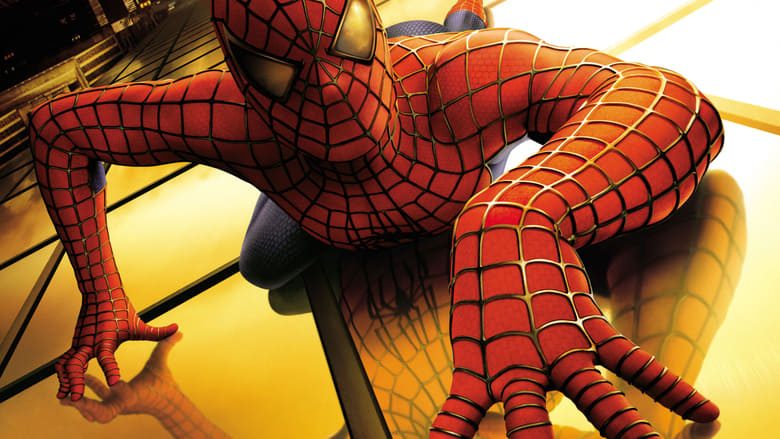 by Yoda
posted on 5/04/02
in
Few blockbuster films can climb out of the massive pits of hype they dig for themselves. Spider-Man is no exception. It is not brilliant, masterful, or revolutionary. Rest assured that it does have problems. But when this hype is put aside, and the film is judged on its own, it stands as a very impressive comic book adaption, and a strong film overall.

As you've no doubt heard by now, the casting of Tobey Maguire will probably go down as one of the riskiest, most intelligent casting choices in modern times. His Peter Parker is inspired, and he is completely believable as everyone's favorite webslinger. Thanks to Maguire's 7 months of intensive training in preperation for the film, very little belief needs to be suspended.

Maguire's performance is strengthed by a solid supporting cast. The role of Mary Jane Watson went to Kirsten Dunst, who, despite not looking the part adequately (in my opinion), did a wonderful job of bringing believable depression and anxiety to her character. This was unexpected, but very welcome. When Dunst cries, it's easy to forget you're only watching a performance. Not to be outdone, Willem Dafoe shines as both Norman Osborn, and the Green Goblin. His smirk is Grinchlike, his narrowed eyes convey various emotions flawlessly, and his evil laughter is over the top without ceasing to be intimidating.

Cliff Robertson handles the underrated, yet pivotal role of Uncle Ben with staggering aplomb. His character is endearing, admirable, and beyond likeable. Rosemarry Harris' Aunt May is all of these things and more. Blowing them all away in the supporting department, however, is J.K. Simmons as newspaper editor J. Jonah Jameson. Simmons' portrayal is sharp, fast, and utterly hilarious. The only fault I can find with his character is that he isn't given quite enough time on-screen.

The story itself is reasonably simple, yet very entertaining. The first half is admittedly slow, but most viewers are likely to find themselves too concerned with living vicariously through Parker and his revelations to take much note of the film's slow pace early on.

The action picks up in the second half with some genuinely impressive sequences. A scene where our heroic little wallcrawler jumps, twists and swirves in slow motion to dodge several blade-laden projectiles stands out. The CGI in these scenes is believable, despite being slightly "larger than life." It does push the envelope a bit, however, with Parker's jumping from rooftop to rooftop. He is far too light on his feet; superhuman powers or not, people don't land that lightly from such a significant jump. Seeing as how the film is obviously aiming to be a more realistic comic book flick (X-Men) as opposed to highly stylized and over the top (Batman and Robin), these things do stand out as undeniable flaws.

The biggest problem, however, is the lack of compelling music. The score is very sleep-inducing, and the best music is heard during the credits. A film like this could benefit greatly from music of some sort, be it modern blood-pumping beats, or a symphony to give things an "epic" feel as they did in the film's jaw-dropping 2-minute trailer. Unfortunately, we get neither of these, and are left with action sequences which impress our eyes, but not our ears, and thus, lack emotional weight. The importance of music in film is easy to underestimate, but when it's not there, you notice.

My hat is most definitely off, however, because of one simple, constant theme throughout the movie: heroism is not fun. Parker has a good time with his new abilities early on, but his fun is spoiled by what amounts to reality punching him in the face. He eventually comes to the conclusion that a large amount of responsibilty has fallen upon his shoulders along with these powers. They are not here for his amusement. This theme echoes that of The Lord of the Rings: The Fellowship of the Ring, and is a refreshing change of pace from the depiction of heroes as people who enjoy having to save the day, and for whom everything ends up happy in the end.

Spider-Man does not end on a completely happy note. It does not take the easy way out. It sticks by its message, and its admirable, realistic depiction of heroism until the very end. For that, it deserves praise.