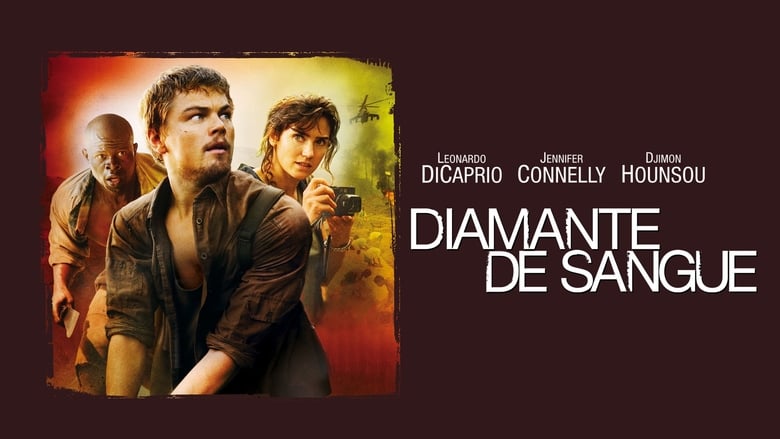 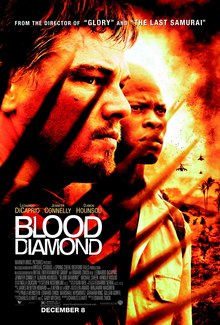 It is no secret that I enjoy the work of Leonardo DiCaprio. Whenever I was younger, I never really respected him, always shamelessly interlinking him with that artsy movie about the boat that sinks, it's an indie movie, no shame if you doesn't ring any bells. As the years rolled by, I realized that there was more to the pretty-boy that wooed audiences. What's Eating Gilbert Grape, Inception, Django Unchained, The Aviator, Catch Me If You Can, The Departed, and many others that I haven't even discovered yet, Leonardo DiCaprio has acting chops that can't be denied, at least in my book, which is the only book worth reading, ... at least in my book. And so, explain to me why there are so many other movies of his that I will put off for months at a time, such as the one that I am watching today? I can actually explain this one, this one I didn't want to watch because it looks like a war-film, and well, that's not where the party's at.

Blood Diamond is a 2006 American-German political war thriller film directed by Edward Zwick, who I know for directing Love & Other Drugs, as well as helping to produce Shakespeare in Love, which made him one of the recipients of the Academy Award for Best Picture of that year. The film stars Leonardo DiCaprio, Jennifer Connelly, as well as Djimon Hounsou. Connelly perhaps known most for her award-winning performance in A Beautiful Mind, while Djimon Hounsou received Academy Award nomination for his performance in this movie, as well as his performance in ... In America. The film takes place during the Sierra Leone Civil War sometime in the late-nineties or early 2000s as many atrocities and misfortunes befall many of the citizens in West Africa. The movie derives its name from the diamonds that were mined and sold for financial profit by warlords and diamond companies across the world.

While it's debatable whether or not there was a certain amount of glossy-finished added to the scenery, the film certainly captures feelings of desolation and terror, emphasizing a lot of the dangerous and troubles being faced. They also spread the blame for the travesties by saying that, for every diamond that is found through forced labor, there are citizens from other countries, like the United States, ready and willing to reap the benefits. The scenery and ideology are certainly applied with enough precision to feel powerful in the message that they are trying to portray. Thankfully, the movie itself doesn't come across as a two-hour film meant to make diamond-buyer feel guilty, and there is actually a quality narrative to behold. Leonardo DiCaprio plays the role of an ******* that happily manipulates the problems to his benefit, Jennifer Connelly plays a reporter that wants to make it better for everyone, and Djimon Hounsou plays somebody that is basically the product of everything that is happening. He loves his family, and is merely doing what he believes is necessary to survive.

Everybody plays their roles particularly well, Djimon Hounsou carrying a lot of believable emotion with his character, Connelly seeming bitter with not being able to do more, and DiCaprio seeming like an opportunist with an inner goodness. The movie isn't filled with impeccable twists or strong psychological complexity. You can practically see where the story is going from a mile away. It doesn't shy away from a lot, but it doesn't introduce very much that we haven't already seen. There's a certain predictability that I think a lot of viewers probably experienced, but at the same time, I was entertained for the entire two-hour experience. There are moments that are meant to be more powerful than what they feel, and I believe a lot of that can be explained by the storytelling itself, however, the performances themselves are worthwhile and very good. The final thirty minutes of the movie are the moments whenever I believe the movie begins to carry a certain form of sentimentality behind the logic that feels disproportionate to some of what came before.

Therefore, the movie itself doesn't always really achieve greatness when it comes to giving a hollowing look at something very dark, but the moments when they are being chased or fleeing, and the moments when it evolves more around upbeat action are where this movie finds its best moments in my opinion. I am not trying to suggest that there the moments of emotion don't have the heart in them, but rather to say that the storytelling itself lessened those moments and they could have been appreciated more than they were. In an effort to keep it simple, I will say that the movie had strong performances from its three main protagonists, as well as riveting action-scenes and a decent. The atmosphere was captured superbly, and I was entertained from the beginning to the end. Unfortunately, somewhere in the predictability and structuring, the movie fell short of amazing. I will say that at its best moments, it is very, very good.
» More about Blood Diamond
» More reviews of Blood Diamond
» More reviews by McConnaughay