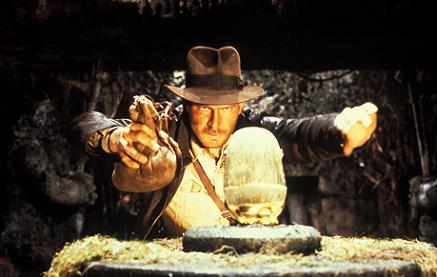 Kind of hard to do a walk down memory lane without talking about this movie. As I just mentioned, both George Lucas and Steven Spielberg were a HUGE part of my childhood. Especially Spielberg. Between his movies and the animated TV shows he produced like Tiny Toons and Animaniacs. If Disney could somehow pry him away from Dreamworks (fat chance) they would practically own a monopoly on my childhood. And my very first introduction to his films came in the form of my favorite Fedora wearing, whip cracking, Nazi killing archeologist. The man who made a very boring job, look AWESOME! Along with Lucas as the producer, they made one of the best trilogies ever made. An homage to the film serials of old, Indiana Jones in pure unadulterated fun and visual spectacle; having brought so many classic scenes and lines to the masses. From the idol scene, Indy running away from the natives, the Ark of the Covenant being opened, and especially the scene where faced with a swordsmen of considerable skill and flair, Indy brushes him off by shooting him all nonchalantly. Add in the classic score by John Williams, and we have one of the best movies for pure entertainment! For as long as I can remember watching movies, I have always been aware of Indiana Jones. There was never a time I remember where I did not know who he was. And Indiana Jones IS my all time favorite cinema character. And considering all the other great characters I like, that should say a lot! This movie is one of my all time childhood favorites. It was one of the two trilogies I watched as a kid that made me fall in love with movies in the first place.