Ivan the Terrible, Part One 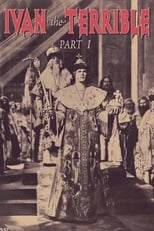 Release: Jan. 20th, 1945
Runtime: 1 hour, 39 minutes
Sergei Eisenstein's final film, this is the first part of a three-part biopic of Czar Ivan Grozny, which was never completed due again to producer dissatisfaction with Eisenstein's attempts to use forbidden experimental filming techniques and excessive cost overruns. The second part was completed but not released for a decade after Eisenstein's death and a change of heart in the USSR government toward his work; the third part was only in its...

8 Terrible, Terrible Glitter
It's almost sad how terrible Glitter is doing in the box office. But then again, everyone with popularity and money thinks they can make a movie, regardless of their acting skills or lack there of. ...
11 What do you guys think is better: the Godfather part 1 or part 2?
for me, i'll have to go with part 2. i don't know why but i like it way more than the first one...