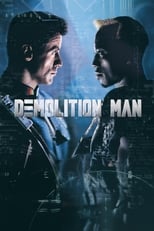 Release: Oct. 8th, 1993
Runtime: 1 hour, 55 minutes
Simon Phoenix, a violent criminal cryogenically frozen in 1996, escapes during a parole hearing in 2032 in the utopia of San Angeles. Police are incapable of dealing with his violent ways and turn to his captor, who had also been cryogenically frozen after being wrongfully accused of killing 30 innocent people while apprehending Phoenix.

We didn't find any linked discussions for this film. Here are the results of a quick search of possibly related threads:
9 Demolition Man 2
Sylvester Stallone officially announced that Warner Brothers are working on a sequel/reboot of the 1993 classic. ...
8 Demolition Man question
In the movie "The demolition man" starring sylvester stallone, in the scene after he was defrosted and went to the restroom of the police department he complained that they dont have any toi...
32 Demolition man thread
i ve just recently rewatched this movie after years, and i have to say its one of hell of an action film mixed with social satire done very efficiently like the other 80s movies example robocop and es...
18 Whats with Demolition Man?
Hi I remember watching Demolition Man as a teenager, oh those happy days, and recently I went back to reminisce the good old days of excessive mussel violence. But when watching it on my NowTV box ...
13 The Running Man (1987) vs. Demolition Man (1993)
I saw The Running Man again recently, and found it be quite similar to Demolition Man in the sense that it is a futuristic action movie, that is filled with social satire. Both movies feel like Paul ...

JayDee She observes and takes delight in the classic action movie concept of the one-liner (The joy-joy way you paused to make a glib witticism before doing battle...!) and also points out the archetypal characters that the hero can be (I fleshed you out as a blow-up-the-bad- guy-while-grinning type...but ....
READ REVIEW