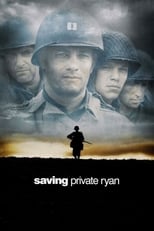 JayDee Film trivia It's become legend now that the film's action, and in particular that opening invasion of Omaha beach, was so realistic and vivid that men who had actually experienced it found it immensely powerful, sometimes overly so.
READ REVIEW

The Rodent Ok there is some artistic license used in the film, but the backdrop of World War II has been picked through with a fine toothed comb.
READ REVIEW

Fabulous Spielberg expertly puts us as close to experiencing the horrors and the humanity within war as I hope we'll ever be.
READ REVIEW
View All (6)