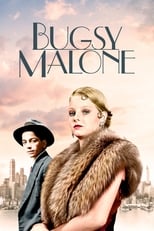 Release: Jul. 22nd, 1976
Runtime: 1 hour, 33 minutes
A pint-sized cast illuminates this musical that is unlike any other ever made. Set in 1929 New York City, Bugsy Malone captures a flashy world of would-be hoodlums, showgirls, and dreamers - all played by child actors! As Tallulah, the sassy girlfriend of the owner of Fat Sam's Grand Slam Speakeasy, future superstar Jodie Foster dances and sings her way into our hearts.

We didn't find any linked discussions for this film. Here are the results of a quick search of possibly related threads:
3 MALONE (1987)
MALONE (1987) This pedestrian action movie stars Burt Reynolds, Cliff Robertson, and Lauren Hutton, as well as an attractive young Cynthia Gibb - an actress who’s continued to work consistently o...

Gideon58 Parker has written a mob story with a relatively straight face and is asking children to execute the story, children who may not be familiar with the kind of movie they are lampooning and that comes through in their playing of some of the scenes here, written for humor by Parker but sometimes not cl....
READ REVIEW