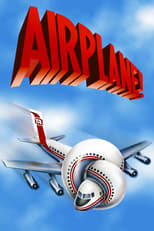 Release: Jul. 2nd, 1980
Runtime: 1 hour, 28 minutes
Alcoholic pilot, Ted Striker has developed a fear of flying due to wartime trauma, but nevertheless boards a passenger jet in an attempt to woo back his stewardess girlfriend. Food poisoning decimates the passengers and crew, leaving it up to Striker to land the plane with the help of a glue-sniffing air traffic controller and Striker's vengeful former Air Force captain, who must both talk him down.

We didn't find any linked discussions for this film. Here are the results of a quick search of possibly related threads:
7 During war, an airplane crashes in the desert.
The "survivors" don´t know that they are dead. I saw it MANY years ago but forgot the title....
2 Which film is this airplane scene?
Which film is this airplane scene?...
8 Death on airplane scene
The scene is on an airplane and the movie from the 80s or 90s. Main character is I think kept on the plane against his will possibly under guard, but during the flight he kills the guy holding him wi...
3 comedy about 2 couples, mostly on an airplane
comedy movie, action takes place mostly on an airplane (possibly flying to Las Vegas), it's about 2 couples... one of the guys asks the other why is he going to marry such a crazy girl - many flashbac...
6 The Naked Gun & Airplane are BACK???!!!
From Wikipedia: Paramount Pictures is considering making a direct-to-video Naked Gun and Airplane! sequel in the near future, as part of the company's new plan to produce four to six films each year w...

Jack1 For the argument between announcers concerning the white and red zones at the airport, the producers hired the same voice artists who had made the real-world announcements at Los Angeles International Airport.
READ REVIEW

Citizen Rules is a spoof of the Airport movies (which I did recently watch and review) and it's a spoof of an old black & white movie Zero Hour.
READ REVIEW