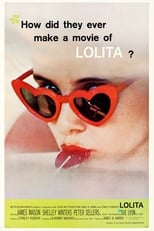 Release: Jun. 13th, 1962
Runtime: 2 hours, 33 minutes
Humbert Humbert is a middle-aged British novelist who is both appalled by and attracted to the vulgarity of American culture. When he comes to stay at the boarding house run by Charlotte Haze, he soon becomes obsessed with Lolita, the woman's teenaged daughter.

We didn't find any linked discussions for this film. Here are the results of a quick search of possibly related threads:
197 Movie Club: Lolita
I don't know if this has ever been done here before, and if it has I'm sorry to repeat it. But I propose we start a movie club, after all this isa movie forum. How this would work would be that I, ...
2 Lolita-ish movie with Indian family from the 2000s
I'm searching the title of a movie. I saw only the trailer. PRODUCTION: High concept film from the 2000s PLOT: An Indian or Pakistani family moves in a middle class American or English neibour...

Iroquois Peter Sellers steals the show as Mason's rival, a quick-talking playwright who's always ready with one line or another (and one memorable scene where he disguises himself as a German psychiatrist serves as an obvious predecessor to his work in Strangelove), while Sue Lyon manages to give the titular....
READ REVIEW

MovieMeditation This was my first time being seduced by Kubricks controversial tale of confusion, obsession, perversion and of course pedophilia, to some extent To write a thorough and thoughtful review of a Stanley Kubrick film after only one watch is far from ideal, but I will try my best to gather all my thought....
READ REVIEW