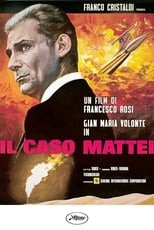 Release: Jan. 26th, 1972
Runtime: 1 hour, 56 minutes
Enrico Mattei helped change Italy’s future, first as freedom-fighter against the Nazis, then as an investor in methane gas through a public company, A.G.I.P., and ultimately as the head of ENI, a state body formed for the development of oil resources. October 27, 1962, he died when his private airplane crashed, one minute before it should land at Milan airport. Officially, he died of a flight accident. Actually, many journalists explored other...

86 The Affair
Just finished binge watching season one of The Affair, an explosive and sexy series on Showtime that will begin its third season on November 20th. I was hesitant about committing to this because ...
1 Affair of the Necklace
Alright, I saw a preview of this film with Hilary Swank and Christopher Walken. Sometimes these period piece movies tend to seem far too similar to each other (even though I usually end up liking the...
1 Movie about a photographer who has an affair
I really need a movie about a guy that is a photographer and takes pictures of movies. One night he calls one out to take shots of her. The lady and the photographer have an affair and the lady is mar...
1 sequel to Thomas Crown Affair
...
33 Kill Bill: The Whole Bloody Affair - Nov. 6, 2007
FINALLY, the NC-17 rated versions of the films will be available... Kill Bill: The Whole Bloody Affair...