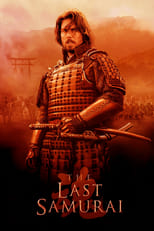 Release: Dec. 5th, 2003
Runtime: 2 hours, 34 minutes
Nathan Algren is an American hired to instruct the Japanese army in the ways of modern warfare, which finds him learning to respect the samurai and the honorable principles that rule them. Pressed to destroy the samurai's way of life in the name of modernization and open trade, Algren decides to become an ultimate warrior himself and to fight for their right to exist.

21 The Last Samurai
Okay people, what is this I'm hearing about Tom Cruise leading in a movie called The Last Samurai? I was watching the entertainment show Extra on TV tonight, and sure enough there was Tom holding a ...
4 The Last Samurai
Saw The Last Samurai the other night and thought it was simply breathtaking: the battle scenes, the acting, the mood and the music (so moving. Hat's off to Mr Zimmer again).... everything went togethe...
4 The Last Samurai
First of all, I'm gonna go all out with the spoilers here. So if you haven't seen this movie yet, and you feel you may want to see it at some point, drop what you're doing and go watch this movie. You...

Yasashii All things considered, The Last Samurai is a movie capable of squeezing tears out of one's eyes, filled with mesmerizing visuals, great battle scenes and well-developed characters.
READ REVIEW

TheUsualSuspect As far as I'm concerned, the film could have ended there and I would of really loved this film.
READ REVIEW

Rhaegar Targaryen Unlike many of the mindless movies he has appeared in, this is a film of exceptional beauty and substance.
READ REVIEW