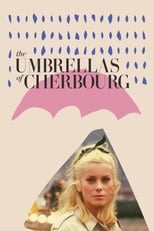 Release: Feb. 19th, 1964
Runtime: 1 hour, 31 minutes
This simple romantic tragedy begins in 1957. Guy Foucher, a 20-year-old French auto mechanic, has fallen in love with 17-year-old Genevičve Emery, an employee in her widowed mother's chic but financially embattled umbrella shop. On the evening before Guy is to leave for a two-year tour of combat in Algeria, he and Genevičve make love. She becomes pregnant and must choose between waiting for Guy's return or accepting an offer of marriage from a...

Takoma11 In this all-singing musical, Genevieve (Catherine Deneauve) and Guy (Nino Castelnuovo) are in love, but their romance is strained when Guy is drafted into the army and must leave Genevieve behind.
READ REVIEW

pahaK Genevive and Guy are in love.
READ REVIEW

Citizen Rules Been there and experienced it...When you're young and in love for the first time, it's like us against the world and nothing in the universe can stop that love, say for one thing...time...And I've always had one saying that rings true, 'time kills all deals'.
READ REVIEW