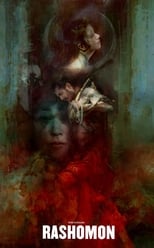 Release: Aug. 26th, 1950
Runtime: 1 hour, 28 minutes
Brimming with action while incisively examining the nature of truth, "Rashomon" is perhaps the finest film ever to investigate the philosophy of justice. Through an ingenious use of camera and flashbacks, Kurosawa reveals the complexities of human nature as four people recount different versions of the story of a man's murder and the rape of his wife.

We didn't find any linked discussions for this film. Here are the results of a quick search of possibly related threads:
10 Rashomon/kurosawa in general
well, i watched this movie for the first time in three years (first kurosawa film i've seen in a while too), and i was surprised and disdained to find that i did not enjoy it as much as i remembered t...
30 MoFo Movie Club: Rashômon
It's Sunday the 28th, time to discuss Rashômon. I hope you all managed to watch it. I've seen it a few times before already, and twice this week. So I'm ready to discuss when you are......

JayDee Indeed it's story was so revolutionary and influential that the film has become shorthand for this type of tale (the Rashomon effect), and has been used numerous times both in film and TV The Usual Suspects, Hero and episodes of The Simpsons, The X-Files, Leverage, Star Trek: The Next Generation an....
READ REVIEW

LordSlaytan [i]Rashomon[/i] is one of my favorites for a whole helluva lot of reasons. First is the casting. Toshirô Mifune, Takashi Shimura, and Minoru Chiaki were in a lot of Kurosawa’s films and they were always perfect for the roles they were cast for..
READ REVIEW
View All (4)