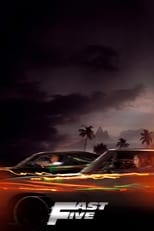 Release: Apr. 20th, 2011
Runtime: 2 hours, 10 minutes
Former cop Brian O'Conner partners with ex-con Dom Toretto on the opposite side of the law. Since Brian and Mia Toretto broke Dom out of custody, they've blown across many borders to elude authorities. Now backed into a corner in Rio de Janeiro, they must pull one last job in order to gain their freedom.

6 Need FAST movie tips FAST! (preferably comedy/action/drama) - Thanks!
Hey. Tomorrow i'm going away on a car trip that will take ~12h, which will get very lame! So i thought i could ask you guys here if you had any movie tips, just to spend some time tomorrow... :P I p...
46 Fast 5 (Fast and the Furious 5)
Universal Brings Fast & Furious 5 in 2011 with 'Fast Five' In a story from Variety, Universal Pictures is filling up for another Fast & Furious. The title for this one is being called Fas...

BumbleBee Dom, Brian and Mia fit perfectly into the film and as they had in the former films, all three performers bring the regular bad-assery to their characters.
READ REVIEW

TheUsualSuspect The film opened to $86M, but the film just before it opened to $70.
READ REVIEW

MovieMan8877445 Fast Five has been the best out of the series, really making it more than just a car film.
READ REVIEW