Attack in the Pacific 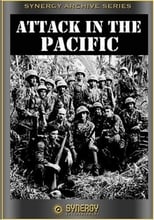 Release: Jan. 1st, 1944
Runtime: 52 minutes
Part of a a video series that documents the fighting between the United States and Imperial Japan during and immediately after World War II.