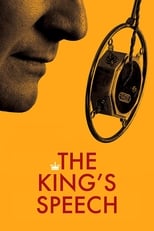 Release: Sep. 6th, 2010
Runtime: 1 hour, 58 minutes
The King's Speech tells the story of the man who became King George VI, the father of Queen Elizabeth II. After his brother abdicates, George ('Bertie') reluctantly assumes the throne. Plagued by a dreaded stutter and considered unfit to be king, Bertie engages the help of an unorthodox speech therapist named Lionel Logue. Through a set of unexpected techniques, and as a result of an unlikely friendship, Bertie is able to find his voice and...

We didn't find any linked discussions for this film. Here are the results of a quick search of possibly related threads:
36 The King's Speech (2010)
Wow what a beautiful film about King George VI and his speech therapist helping him with an awful stammer. The added weight of impending war with Germany gives the needed urgency. I liked this face...
5 The King Speech Classical Music Background?
So, in The King Speech movie, there's this scene where Colin Firth deliver his speech about the start of a war to his citizens, and there's some orchestra/classic music playing in the background. The ...
7 Colin Firth has different color eyes in The King's Speech (2010)? *image attached*
Hello, At 01:47 during the speech (image attached), it seems clear that George VI (Colin Firth) has heterochromia (different color eyes). My research finds that George VI had blue eyes, and that Col...
2 a speech interrupted by a bus
hey, a scene with a guy speaking to a crowd and between they come a bus...
57 Favourite speech
What's your favourite film speech/monologue? Of course you can list more, as long as it may be very hard to choose exactly one. 1. Valuska monologue from Werckmeister Harmonies: 2. Irimias monolog...

Iroquois There's a collection of solid character actors to fill out the rest of the film, and the production design is great (though I question some of the cinematography choices - what's with Hooper's tendency to frame close-ups so they're noticeably off-centre.
READ REVIEW

MovieMad16 Charming Actor with a charming performance which gave the film its wit and strong power that makes films like The King's Speech really be brilliant.
READ REVIEW
View All (5)