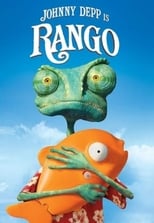 Release: Mar. 2nd, 2011
Runtime: 1 hour, 47 minutes
When Rango, a lost family pet, accidentally winds up in the gritty, gun-slinging town of Dirt, the less-than-courageous lizard suddenly finds he stands out. Welcomed as the last hope the town has been waiting for, new Sheriff Rango is forced to play his new role to the hilt.

CaptainT Rango is a good looking animated film and a fun parody of the western genre.
READ REVIEW

Daniel M I feel though that Verbinskis first ever feature film Mousehunt can be better compared to Rango, a family comedy about a pesty rodent who refuses to leave a house in a Home Alone style comedy of errors from those attempting to get rid of the mouse, like Rango it can be categorised as a family film ....
READ REVIEW

Iroquois Rango seems like it should have been the kind of modern animated film that I'd have loved outright with its clever use of parody and off-beat approach to its material, but it still just manages to be merely alright.
READ REVIEW
View All (6)