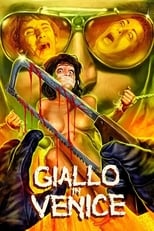 Release: Dec. 31st, 1979
Runtime: 1 hour, 31 minutes
Venice: The bodies of a married couple, Flavia and Fabio, are discovered on the dockside. She has drowned and he has been stabbed to death with a large pair of scissors. Marzia, Flavia's best friend, is questioned by the police and a chain of slaying is set in motion. The victims include a prostitute who is stabbed in the crotch; Marzia's lover, who is shot in the kneecaps before being doused in petrol and set alight; and Marzia herself...

We didn't find any linked discussions for this film. Here are the results of a quick search of possibly related threads:
2 78th Venice Film Festival
This prestigious film festival (one of the big 3, along with Berlin and Cannes) will run this September 1-11. Like the afore mentioned festivals, along with Sundance and Locarno (which just fini...
16 Giallo
I found one Topic about Giallo but it was incomplete. I hope it's ok to write a new Topic about it - - - - - - - - - I advise you to listen this music by Bruno Nicolai to read this Topic (this i...
20 BIGGEST Giallo List Ever
Hello everyone, For those of you who likes Giallis let's compile the biggest list of Giallo movies, preferably with the links or hints where we can download them. As per Wikipedia-Giallo (Italian pr...
9 Looking for a (potential) giallo movie from the 70's
Hello everyone, I have been looking for a movie for about 20 or so years no with luck. I'm hoping someone here can help. Parts I potentially remember plus a rating of how certain I am that the d...
4 What are your favourite Giallo films?
Here are some of my favourites: What Have You Done to Solange? (1972) Paranoia (1970) Paranoia/Orgasmo (1969) Torso (1973) Black Sabbath (1963) What Have They Done to Your Daughters? (1974) T...