Eternal Sunshine of the Spotless Mind 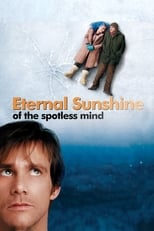 Release: Mar. 19th, 2004
Runtime: 1 hour, 48 minutes
Joel Barish, heartbroken that his girlfriend underwent a procedure to erase him from her memory, decides to do the same. However, as he watches his memories of her fade away, he realises that he still loves her, and may be too late to correct his mistake.

Gatsby Because, why use a bunch of disintegrating structures and blurry, claustrophobic memory scramble on a plot that can be boiled down to "Baby, please don't go"?A couple of scenes involving a memory version of Joel and Clementine trying to hide from the thingamajig are hilarious and daring, but the res....
READ REVIEW

Skepsis93 It's about two years now since I started looking at film in a new light, the beginning of a passion that has lasted me until now and shows no signs of slowing down, and it started with Eternal Sunshine of the Spotless Mind.
READ REVIEW

Iroquois This remove is most apparent when I watch what is probably the most all-around popular/acclaimed film he's ever penned, Eternal Sunshine of the Spotless Mind.
READ REVIEW
View All (9)

The Next Big Thing
4th