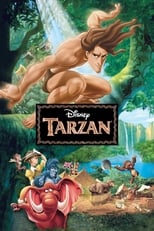 Release: Jun. 18th, 1999
Runtime: 1 hour, 28 minutes
Tarzan was a small orphan who was raised by an ape named Kala since he was a child. He believed that this was his family, but on an expedition Jane Porter is rescued by Tarzan. He then finds out that he's human. Now Tarzan must make the decision as to which family he should belong to...

5 Legend Of Tarzan
Since my birthday was a working monday ( no 4th of july holiday in India ) and no one had time to party , I made the best of my evening by seeing a movie . This movie has not impressed the cri...
7 The Legend of Tarzan (2016)
109 min | Action, Adventure Release Date: 1 July 2016 Tarzan, having acclimated to life in London, is called back to his former home in the jungle to investigate the activities at a mining e...

MovieMeditation Disneys 37th animated classic, 'Tarzan', the last film in the renaissance, is the lone proof that one should never listen blindly to critics or any mass critical judgment as a singular guidance for movies.
READ REVIEW

Gideon58 The classic Edgar Rice Burroughs character was brought to the big screen in over 40 live action films and then Disney scored when they took a crack at it in a 1999 animated musical rethinking of Tarzan that provides a lot of what fans of the character might expect with a degree of substance that the....
READ REVIEW