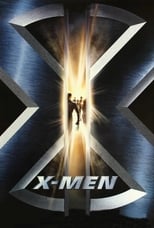 Release: Jul. 13th, 2000
Runtime: 1 hour, 44 minutes
Two mutants, Rogue and Wolverine, come to a private academy for their kind whose resident superhero team, the X-Men, must oppose a terrorist organization with similar powers.

PeterVincent The characters range from good to bad, with high moral values to low morals, with respect for people and no respect, there is a character for everyone.
READ REVIEW

TheUsualSuspect There have been many comic book films before X-Men, the most notable ones are Superman and Batman, yet there have even been lesser known comic book characters getting their big screen debut before the mutants.
READ REVIEW

The Rodent After more rewrites pushed the start date back and back and back, filming eventually started in September 1999, 10 years after initial film conception.
READ REVIEW