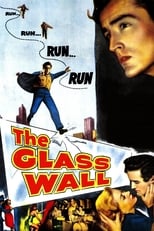 Release: Mar. 19th, 1953
Runtime: 1 hour, 22 minutes
Peter Kaban, a Hungarian refugee, is about to be deported after jumping ship in New York harbor. He needs to find an ex-G.I named Tom whom he helped during the war, as Tom.can prove Peter's right to legal entry iof the United States. It is a race against the clock! If he can't find Tom within 24 hours and prove his case, he will be branded a fugitive and will be permanently disqualified for U.S. citizenship.

Citizen Rules So Peter (Vittorio Gassman) jumps ship and tries to find Tom, not knowing that if the ship he was on sets sails he will then become a fugitive and never be allowed entry into the U.S.
READ REVIEW