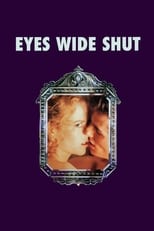 Release: Jul. 16th, 1999
Runtime: 2 hours, 39 minutes
After Dr. Bill Harford's wife, Alice, admits to having sexual fantasies about a man she met, Bill becomes obsessed with having a sexual encounter. He discovers an underground sexual group and attends one of their meetings -- and quickly discovers that he is in over his head.

73 MOVIE OF THE (HALF) MONTH - MAY 2017 - EYES WIDE SHUT (1999)
Hello all and welcome to the re-start of the Movie of the Month/Movie Club! In case you're unfamiliar with how this works, every month a movie gets picked (usually by a member who volunteers) and is...

Cobpyth Kubrick's films almost always have multiple layers that can be explored and this is definitely that kind of film.
READ REVIEW

mark f I probably have a lot more to say about this film because I haven't really said anything, but I haven't watched this film in at least six years.
READ REVIEW

Iroquois Knowing that the film was (as with most of Kubrick's output) actually filmed in Britain makes his recreation of downtown New York stand out as an uncannily detailed one, with there being just enough changes to make it feel like the somewhat surreal dream reality that it may or may not be intended to....
READ REVIEW
View All (5)