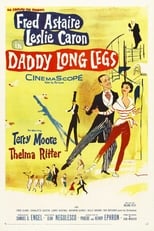 Release: May 5th, 1955
Runtime: 2 hours, 6 minutes
Wealthy American, Jervis Pendleton has a chance encounter at a French orphanage with a cheerful 18-year-old residen, and anonymously pays for her education at a New England college. She writes letters to her mysterious benefactor regularly, but he never writes back. Several years later, he visits her at school, while still concealing his identity, and—despite their large age difference—they soon fall in love.

Chypmunk The tale itself is adequate, if somewhat unremarkable, and the script at least contains a few witty one-liners (chiefly for the supporting characters played by Thelma Ritter and Fred Clark) that do provide a smile here and there, whilst the dream sequences are quite nicely presented and help to give....
READ REVIEW